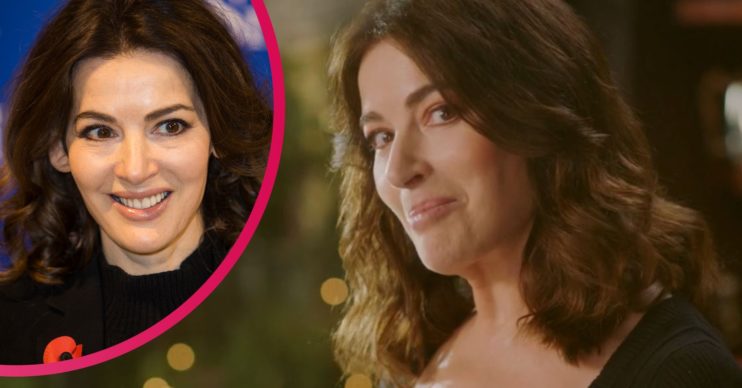 During Monday (December 7) evening’s episode of the popular cookery programme, Nigella was whipping up a dish when she mentioned her microwave.

However, the culinary expert caused a storm on social media with the way she pronounced the word.

How did Nigella Lawson pronounce microwave?

Instead of calling it a ‘micro wave’, she jokingly referred to her ‘meekro-wav-ay’.

She said on the programme: “I still need a bit of milk, full fat, which I’ve warmed in the microwave.”

On Twitter, stunned viewers loved the odd touch, with one calling it: “Truly iconic.”

Another asked, gobsmacked: “What did Nigella just call the microwave?!”

A third said: “Please tell me that was a joke, #Nigella pronouncing the microwave [as] ‘mee-crow-wahvay’. If not, she has reached the top of the posh class.”

What did Nigella just call the microwave?!

What did #nigella just call the microwave?!! 😂

In last night’s Cook, Eat, Repeat, she took viewers through her grandmother’s delicious creme caramel recipe, which she used to whip up a caramel custard dessert.

Nigella’s show also featured spicy pasta sauce made from Italian ‘nduja and cavolo nero, as well as a brown butter colcannon and a dish of black pudding meatballs with tomato sauce.

The star was on The One Show last month, where she discussed the biggest inspiration for her cooking.

She said on the programme: “[It came from] my mother,” she said. “Nowadays this wouldn’t be allowed, but when I was six [me and my sister] would just be on rickety chairs over the gas stove stirring things, not cooking as entertainment but just to help get food on the table.

“You learn because you see it happening and you had to.”