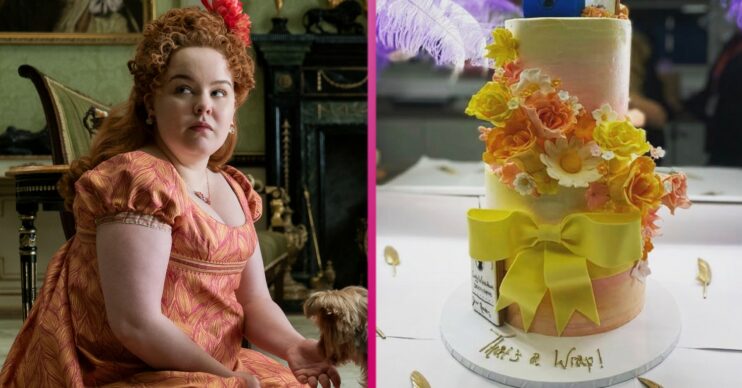 The new season is on its way!

Bridgerton season two’s filming has been going on for months – but Nicola Coughlan has confirmed the end is now on the horizon.

The actress, who plays Penelope Featherington in the period smash hit, has finished her scenes for the latest episodes. She made the announcement on Twitter today.

In fact, in a behind-the-scenes snap, she was even given a cake to celebrate in her dressing room

The three-tiered orange cake references her character’s alter-ego as gossip writer Lady Whistledown, with a fondant pen and quill on the top.

On the stand, the words “that’s a wrap” was written in icing.

Alongside the photo, Nicola wrote: “Any that’s a wrap on Pen!

The wrap announcement comes after the series was forced to shut down numerous times due to coronavirus outbreaks.

Thankfully, it seems they managed to get the set under control to finish the show.

In the story, The Viscount (Jonathan Bailey) is in search of a wife – but not love.

However, the arrival of newcomer Kate Sharma (Simone Ashley) sends him into a tailspin.

A first look clip proves they do not get off on the right foot. He definitely has his work cut out for him.

It’s not known when Bridgerton season 2 will air. Spring 2022 seems the most likely earliest launch time.

Bridgerton is available on Netflix.