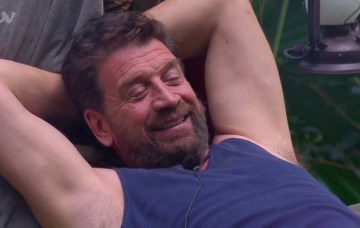 Nick Knowles has so far seemed to be one of the strongest and most determined of the I’m A Celebrity… Get Me Out of Here! stars – but he may not be as invincible as he seems.

The DIY SOS presenter’s son Charles made an appearance via a phone call on I’m A Celeb spin-off Extra Camp last night, where he admitted he’s “worried” about his 56-year-old dad.

Speaking to presenters Scarlett Moffatt and Joel Dommett, Charles said: “People don’t know, Dad’s actually got really bad back problems, so him giving up his pillow… we are quite worried about him.”

Charles, who is the oldest of Nick’s four kids, added: “He likes keeping busy and helping people,” and joked that his dad’s music is “shocking.”

It was the one luxury item he’d brought in with him, and he explained to the camp: “Do you know why I chose the pillow? So I could give it to anyone who was struggling sleeping.”

Earlier in the episode, Anne had opened up to Nick after quitting her first Bushtucker trial.

The star, who was diagnosed with autism in 2007, told him: “I’ve had an incredibly tough time. I wasn’t expecting these levels of physical discomfort, I really wasn’t.”

What a lovely moment! #TeamNick

On Sunday night’s show, Nick, who is also dad to Tuesday, TJ and Eddie, took part in the hardest challenge – maybe ever.

He was rewarded by viewers, who voted him to be the new camp leader.

Nick thanked fans watching at home, saying: “It’s very lovely of people to have voted for me to be camp leader, and I do appreciate it.”

He chose Anne as his deputy, who said she was “delighted.”

The star’s Instagram account also shared the news, writing beside a clip of the announcement: “New camp leader 👑 Thank you for all the support #TeamNick.”

Do you think Nick’s going to make a good camp leader? Leave us a comment on our Facebook page @EntertainmentDailyFix and let us know what you think.