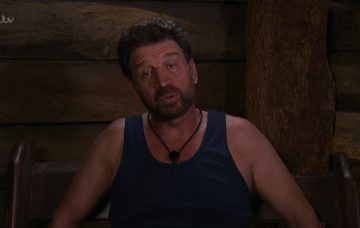 He was in the jungle for 20 days

Nick Knowles has revealed he lost TWO stone while in the I’m a Celebrity jungle.

The DIY SOS presenter, 56, was voted off the show on Thursday night after 20 days Down Under.

Appearing on This Morning on Friday via a video link from the Palazzo Versace hotel – where the celebrities stay after they’re voted off – Nick opened up about his jungle experience.

Nick admitted being on such small amounts of food took a toll on his body, revealing he lost 14 kilos.

Eamonn Holmes exclaimed: “I might sign up next year!” to which Ruth Langsford quipped: “I need to get in that jungle.”

Explaining just how difficult jungle life is, Nick continued: “The bits that you don’t see very much in the programme are actually the things that weigh you out.

“You have to go to the bottom of a very steep hill to get the wood for the fire which you have to do about eight or ten times a day and then bringing the bags of water – you’re pulling about 30 kilos, those bags when they’re full.”

Meanwhile, during the chat, Nick publicly apologised to fans for walking around camp in tiny red speedos.

Viewers got an eyeful on Tuesday night’s episode when Nick joined campmate Emily Atack to collect water for the camp – but decided to do it in just his pants.

He explained to Emily, 28, that he couldn’t take on the task fully clothed so he decided to strip down to his tiny red trunks.

But fans didn’t know what to make of Nick’s budgie smugglers, with many admitting they found it hard to watch.

Others were left slightly hot under the collar!

Nick told Eamonn and Ruth: “Can I publicly apologise for the red budgie smugglers? They were all I had left to wear.”

Ruth replied: “We actually quite enjoyed them Nick.”

Meanwhile, Nick’s two sons TJ and Charles recently admitted they had received ‘abuse’ from their friends over their dad’s choice of pants.

Charles said on Loose Women earlier this week: “I’m taking a lot of abuse from my mates at home but if he’s got it, flaunt it, right?!”

Did you enjoy watching Nick in the jungle? Leave us a comment on our Facebook page @EntertainmentDailyFix and let us know what you think!