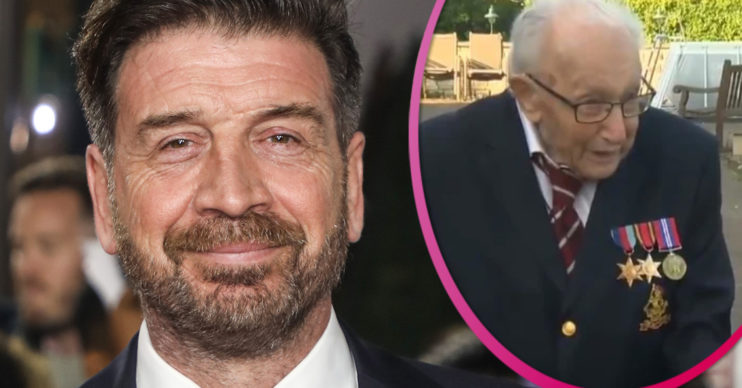 Captain Tom has raised millions for the NHS

The war veteran, 99, has raised over £28 million for the NHS by doing laps of his garden during the coronavirus pandemic.

The former I’m A Celebrity star said he wanted to help Captain Tom after he caught media attention.

What did Nick say?

“I think it’s over 27 million now and when they started it was to raise a thousand pounds.

“But the world’s attention has been quite oppressive as well as beneficial.”

“They want things to keep going and the money they’re raising is very important, but they’re also feeling a bit under pressure.

“Through a friend of theirs I got asked to join in and help out and do a couple of things to keep them safe, and I’ve managed to do that.

“He’s an amazing man and the family are really lovely too, and I was happy to help out there.

“There’s a bunch of people who are able to still work and are two metres apart and we’ll be putting some extra protection for them.”

He completed the last of the 25-metre laps on April 16 but has vowed to continue raising money as long as people keep donating.

A statement said Prime Minister Boris Johnson will “certainly be looking at ways to recognise Tom for his heroic efforts”.