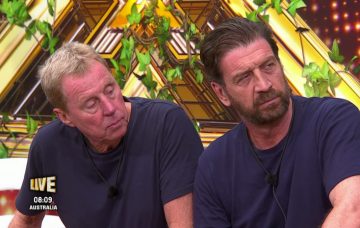 Nick Knowles was concerned for him

Harry Redknapp has revealed that his I’m A Celebrity campmate Nick Knowles was so concerned the football manager was having a stoke that he called in camp medics for help.

Nick was frantically heard calling for a medic during Anne Hegerty’s exit from the jungle, leaving fans asking what the call was about.

Now, the newly crowned king of the jungle said that DIY SOS host Nick, 56, panicked when one side of Harry’s face began to swell fearing it was the start of a stroke.

Read more: Harry Redknapp finally gets his lips around a jam roly-poly and viewers are ecstatic

“My face had swelled up on one side, but I wasn’t having a stroke, thankfully.”

It comes after viewers thought that a medical emergency was unfolding in camp last week after hearing Nick calling for Medic Bob.

Speaking into his mic, Nick apparently whispered: “Gallery, if anybody is listening. I think this is fairly important. We need to see (Dr) Bob as soon as possible, as soon as Anne’s crossed the bridge.”

Following his exit from the show, Nick told The Sun last week: “It was a concern because Harry had a bite on his lip and it had swollen up the night before so I asked to see Medic Bob so it didn’t turn nasty.”

It wasn’t the only time that Harry, who confessed he nearly quit the show over fears for his wife Sandra as she battled sepsis, was attacked by critters during his stint in the jungle.

The football manager had to be attended to by Medic Bob after a cockroach burrowed its way into his ear during the final bushtucker trial of the series, which saw him also face his biggest fear, rats.

Harry, who lost a stone in weight during his time in the jungle, confessed his fussy eating affected his health.

He revealed on Good Morning Britain on Monday: “I’ve never seen a minute of the show. I thought they would call, ‘OK, cut!’ and we’d go behind there and have a bacon sandwich. I couldn’t find the caravan anywhere!”

He added: “I had four days without eating. I lost a stone It wasn’t easy, it was hard. It was tough physically.”