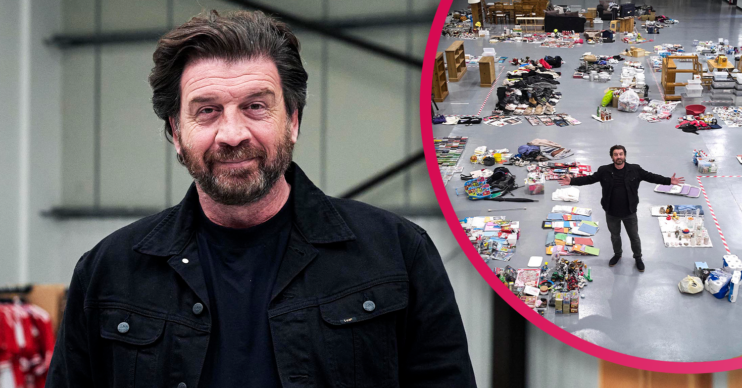 'What came first, Big House Clearout or Stacey's Sort Your Life Out?'

Ahead of the show viewers asked how it would differ from Stacey Solomon’s Sort Your Life Out.

And now, after the first episode has aired, Nick has been forced to defend the show.

Nick said he changed his life after throwing away 85% of all of his possessions and the new show sees him offering families across Britain the chance to do the same and change their lives with his help.

If families are willing to have a clear out and throw away over half of their possessions he will oversee his expert DIY team and give the families the home makeover of their dreams.

Stacey’s Sort Your Life Out doesn’t offer the DIY element, but families on both shows have the contents of their home laid out on the floor of a warehouse.

They then have to pick what to keep and what to chuck, which is where viewers have spotted some similarities.

The reviews are in for the Big House Clearout and it’s fair to say fans are divided.

Read more: Nick Knowles ‘dating mum of two who is 27 years younger than him‘

“Loved this programme and what a wonderful family,” said another.

“Come and do my house please Nick,” another pleaded.

What did Nick say about Big House Clearout?

Nick responded to one viewer on Twitter who pointed out the similarities between the two shows and asked a chicken and egg-type question.

“What came first, @MrNickKnowles Big House Clearout or @StaceySolomon Sort Your Life Out?” they asked, using the chicken and egg emojis.

Nick fired back: “Tidying up with Marie Kondo – or various others.”

Another fan tweeted Stacey and asked: “Didn’t you start this programme?”

Nick duly responded: “No Stacey is doing one too which comes out soon – room for everyone! Just imagine if there was more than one cooking format [crying with laughter emojis].”

I actually didn’t see it but I’m sure it was a good show https://t.co/rQNCuLpnes

However, the viewer wasn’t leaving it there.

Posting a gif of a kitten with “copycat” emblazoned across it, they countered: “No, it went out in April on BBC ….I think you obviously watched it very closely.”

Nick wasn’t letting it lie, though.

“I actually didn’t see it but I’m sure it was a good show,” he quipped.

So did you watch the show? What did you think? Join the debate on our Facebook page @EntertainmentDailyFix.