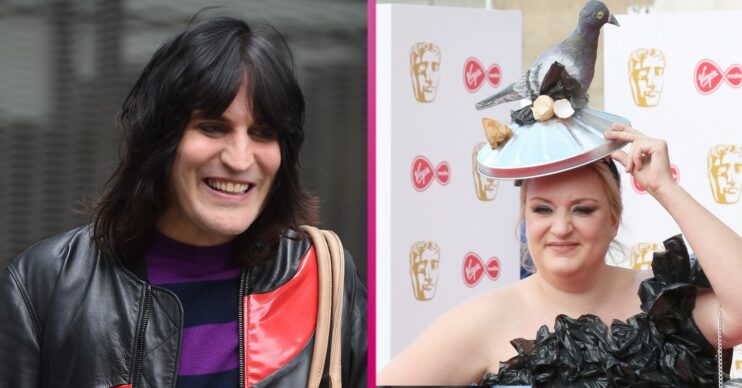 Here's everything we know about the Sky reboot!

Never Mind the Buzzcocks is finally set to return with the likes of Daisy May Cooper and Noel Fielding, Sky has revealed.

The iconic pop culture panel show is returning exclusively to Sky and NOW as a Sky Original.

The streaming service revealed the exciting news on Wednesday (July 14 2021).

Here’s everything we know so far about the reboot and who’s in the cast!

The legendary Never Mind the Buzzcocks will be returning for a brand new series.

For those readers who didn’t catch the original BBC version, it’s a music themed comedy show.

The series became as famous for its celebrity strop offs – Preston, anyone? – as for its quirky team captains.

Never Mind the Buzzcocks originally aired between 1996 and 2015.

The series was first hosted by Mark Lamarr, then by Simon Amstell, and later by a number of guest presenters, with Rhod Gilbert hosting the final series.

The title plays on the names of punk rock band Sex Pistols’ Never Mind the [bleep] album, and the punk band Buzzcocks.

Read more: When did Noel Fielding join Bake Off and what’s his net worth?

Never Mind the Buzzcocks return – who is in the cast?

First of all, Greg Davies will present the new series of Never Mind the Buzzcocks, and we can’t think of anyone better suited.

He’ll appear opposite the amazing Daisy May Cooper of This Country fame.

Finally, Sky has also signed up Hate Thy Neighbour’s Jamali Maddix as a regular guest.

Each week, they’ll be joined by a roster of music and comedy stars to compete against each other.

Viewers can expect the unpredictability of the original series, with some of the best known and loved rounds remaining, alongside some new surprises thrown in along the way.

Greg Davies said: “I have always loved Never Mind the Buzzcocks and am thrilled to be the new host on Sky.

“We have brilliant comedic talent on the team and plenty of exciting musical guests will be joining us.”

The celebrity guests will be announced later in the year.

How many parts will the new series be?

The iconic series will return to our screens with eight episodes to start with.

Each episode will be 45 minutes long.

When will the new series start?

Never Mind the Buzzcocks is officially returning to TV screens in autumn 2021.

Buzzcocks was cancelled in 2015 by the BBC to “create space for new entertainment formats”.

Sky has recommissioned it as a result of demand from fans.

Director of Sky Arts and Entertainment for Sky, Phil Edgar-Jones said in a statement that Buzzcocks is “one of those truly iconic shows” and described his thoughts on the show’s return as “a buzz and a treat for lovers of tuneless humming everywhere”.

Kate Edmunds, Director of Programmes for Talkback, added: “We’re over the moon that Sky have made the very wise decision to reboot our beloved Buzzcocks.

“Musicians, stand down, we hear your deafening cries for some long overdue attention.”

Never Mind the Buzzcocks will air on Sky in the autumn.

Were you a fan of Never Mind the Buzzcocks? Leave us a comment on our Facebook page @EntertainmentDailyFix.