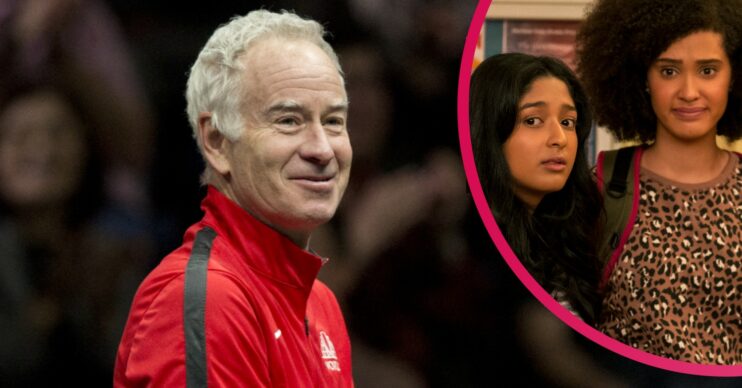 When you think of teenage romantic comedies, 62-year-old tennis legend John McEnroe is an unexpected addition to the cast list.

And yet, with Netflix’s Never Have I Ever, he becomes the perfect guide through the life of Devi Vishwakumar.

For the past two seasons, Devi has been navigating love and high school, with McEnroe narrating the drama.

So how did creator Mindy Kaling convince him to take part?

Turns out, it was a chance meeting at a Hollywood party that gave Kaling the idea. And once he was approached, McEnroe couldn’t resist the new challenge.

Speaking to LA Times, McEnroe explained: “I’ve always believed in the theory that it’s better to try and fail than not try at all. I like to do things that get me out of my comfort zone.”

McEnroe holds particular personal resonance as he is Devi’s late father Mohan’s favourite tennis player. In a memory of him, Mohan explains he finds McEnroe “a firecracker, just like her”.

Sadly, the character dies before the first episode, with the loss having massive repercussions on the youngster’s life as a result.

But that’s just the start of Devi’s problems, as she finds herself caught up in the middle of a love triangle.

Now she has to choose – swimming captain Paxton, with washboard abs and a secret soft side? Or Ben, her intellectual equal and former nemesis who has proven to be a true star in a time of crisis?

Who joins John McEnroe as narrator?

McEnroe is not the only celebrity to lend their voice to the chaos at Sherman Oaks High School.

However, while most of the show is dedicated to Devi’s point of view, other stars pop in with special dedicated episodes to certain characters.

In season one, Brooklyn 99’s Andy Samberg became the inner voice of Ben, one of Devi’s two love interests.

In season two, high school hotty Paxton got the specialist treatment. The part was initially given to Chrissy Teigen. However, following her Twitter bullying scandal, she pulled out a month before the show aired.

When the show finally dropped, it was revealed that she had been replaced by Victoria’s Secret model, Gigi Hadid.

John McEnroe Netflix Never Have I Ever