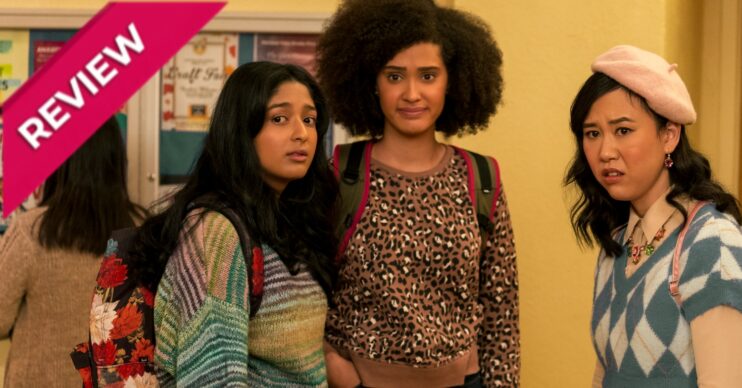 Never Have I Ever season 2 review: Does Mindy Kaling romcom still have its heart?

Devi has a bid decision to make - are you Team Ben or Team Paxton?

Never Have I Ever season 2 picks up immediately after the events of season one, and Devi has a serious problem on her hands.

Our leading lady has landed not one, but two, boyfriends, and now she has to pick one.

Naturally, she goes about this really, really badly.

With her two best friends Fabiola and Eleanor in tow, Devi needs to navigate her love life.

Are you team nerdy former foe Ben? Or team super hot, but a little blinkered Paxton?

She also needs to deal with increasing family strain and high school. Especially when the arrival of cool-as-hell Aneesa threatens to ruin everything.

But Never Have I Ever has another string to its bow – Devi’s familial relations and her connections to her traditional Indian background.

It makes a great effort in demonstrating life as an Indian teen in white suburbia, which despite its efforts to be ‘woke’ still provides some misogyny and microaggressions when chips are down.

As the family continues to grieve the loss of patriarch Mohan, Devi’s relationship with her mother becomes a far more central part of the story.

It’s a nice step forward after their constant fighting in season one. Mother Nalini is trying harder to understand her complicated daughter, and it’s working.

But feeling isolated and lonely, her desire to move to India to be closer to family weighs heavy. However, there’s a hunky rival doctor that might be the solution she needs.

Meanwhile cousin Kamala is also having to grapple with misogyny in the workplace. Plus the added pressure of a potential arranged engagement to hunky Prashant.

Season two fleshes out some of the characters to bring a more satisfying tale of life in the Californian suburbs.

However, unfortunately, a couple of others are a little more relegated to the sidelines, when perhaps they shouldn’t be.

With such a large ensemble cast, it’s impressive that every character without exception has a side plot away from Devi’s main story this time around.

But it results in you maybe not being as invested as you need to be in any of them.

Nevertheless, it’s a really fun ride, and you can blast through the 10 episodes with ease.

Is Never Have I Ever season 2 worth the watch?

Never Have I Ever season 2 may spread itself a little thin with the number of subplots going on, but it’s still a hell of a lot of fun.

If you enjoyed the first season, then the second will capture your heart just as quickly.

A hilarious and touching take on adolescence, Never Have I Ever is the juicy teen rom-com for fans missing To All The Boys I’ve Loved Before.

Maitreyi Ramakrishnan is a stunning leading lady. Initially plucked out of a collection of videotape auditions by Mindy Kaling, she takes the weight of the series on her shoulders like a pro.

Without her perfectly balancing Devi’s horrid behaviour with a good heart, the whole show would collapse. But it doesn’t. Instead, you can’t help but root for the girl whose decisions are unforgivable at the best of times.

Her relationships with Ben and Paxton come from genuine, but differing, places, and you can understand why she finds herself so torn.

Consequently, both boys are great leading men, with their own motivations or liking or disliking Devi understandable, if a little maddening. Her frenemy-ship with Aneesa tows the same line.

But it’s the friendships with the women in Devi’s life – Fabiola, Eleanor, Aneesa and Kamala – that truly define what it means to be a teenage girl.

But Devi has a decision to make – and viewers are going to be divided in the best way.

We’re already excited to see what lies ahead if there’s a season three.

Never Have I Ever launches July 15th on Netflix.

Netflix Never Have I Ever TV Reviews