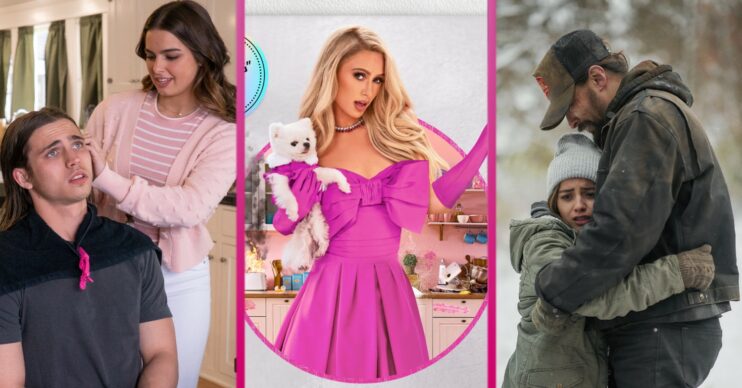 Any excuse to stay indoors...

Netflix in August is on a mission to keep us glued to our TV when we should be outside making the most of the sun.

We’re not even mad – because what they have in store is pretty great.

Whether it’s a new true crime deep dive, saying goodbye to a rom-com favourite, or even trying out some anime, Netflix in August has just what you need.

So what are we waiting for?

Here’s the full rundown of what to expect.

What TV series are coming to Netflix in August 2021?

Paris Hilton invites cameras into her home and kitchen for this new series.

With a host of celebrity guests, Paris aims to become the ultimate hostess with the mostest. Let’s see if the results match the efforts.

All together now: That’s hot.

A happily married man’s life is turned upside down when his wife is killed in a mysterious hit and run accident in Tel Aviv.

Grief-stricken and confused, he searches for his wife’s killers, who have fled to the U.S.  With the help of an ex-lover, he uncovers disturbing truths about his beloved wife and the secrets she kept from him.

Four individually brilliant bakers battle it out to see whose dessert will be chosen for someone’s extra special big day.

Personally selected by Milk Bar founder Christina Tosi, who built an empire on delicious cookie dough, the squad of bakers is on one mission and one mission only: Make dessert dreams come true!

Guillaume Lucchesi thought he had drawn a line under the terrible tragedy which saw the two people he loved the most die: Sonia, his first love, and Fred, his brother.

But Ten years later, Judith, whose love has made his life worth living again, suddenly disappears during his mother’s funeral.

To find her, Guillaume will have to face all the truths that were hidden from him by his family and friends, as well as those that he’d long decided to ignore. For better, but mostly for worse.

The Chair stars Sandra Oh as Dr. Ji-Yoon Kim who lands a new role as the Chair of the English department at prestigious Pembroke University.

Ji-Yoon is faced with a unique set of challenges as the first woman to chair the department, and as one of the few staff members of color at the university.

Nick Brewer finds himself in a horrific situation when he’s kidnapped and displayed on the internet.

Holding a sign that says he abuses women and will die once the stream hits 5million views, his sister and wife have to figure out a way to save him.

However, they soon discover they don’t know him as well as they think.

Clickbait explores how a human’s impulses are tested in an age of social media, and the differences between our real-life and on-screen personas.

In this series, Marie shows the fundamental parts of her cleansing method and how it can affect businesses and relationships as well.

She also opens the door to her own family for the first time.

What documentaries will be released on Netflix in August?

Maximilian Schmidt, known online as Shiny Flakes, was arrested for selling approx. 4.1 million euros worth of drugs from his childhood bedroom in 2015.

At age 19, he managed to create an international drugs empire, selling over a ton of drugs and becoming one of the biggest cybercriminals in German history.

In this documentary, he tells his story.

Memories of A Murderer: The Nilsen Tapes (August 18th)

The story of Dennis Nilsen is infamous as one of the UK’s most depraved serial killers.

Over the course of five years, Nilsen would lure men to his home before murdering them, dismembering them, and disposing of their bodies around his house.

Caught in 1983, Nilsen spent the rest of his life in prison.

This movie is granted access to 250 hours of never-before-published cassette tapes of his private recordings, as well as interviews with those who knew him.

John Of God: Crimes of a Spiritual Healer (August 25th)

This four-episode series follows a team’s investigation into the biggest case of sexual harassment in Brazil’s history.

Central to the case is João Teixeira de Faria, also known as João de Deus, who created an empire on spirituality and healing.

However, more than 200 women claim they were sexually abused by him and the investigation begins to cover even more.

What films are arriving on Netflix in August?

The Kissing Booth is closing its doors in this final installment of the trilogy and Elle has some decisions to make.

In the final summer before heading to college, she needs to decide between boyfriend Noah and her best friend Lee.

With both thinking she’s going to college with them, Elle needs to pick a side between the warring brothers once and for all.

The Secret Diary of An Exchange Student (August 18th)

Best friends Barbara and Thaila decide to go on an exchange program in hopes it will solve all their problems.

But moving from Brazil to the chilly mountains of California comes with problems, and the two girls get themselves into all kinds of absurd and hilarious situations.

Jason Momoa stars as Ray, a man out for justice against a pharmaceutical company that pulled his wife’s life-saving medicine before she died.

However, he soon gets in over his head – putting him and daughter Rachel in danger.

Soon he has to fight for revenge in a very real way while also protecting the only family he has left.

Addison Rae and Tanner Buchanan star in this gender-flipped version of 90s series She’s All That.

The story follows a popular girl who is dared to turn the school’s biggest loser into prom king.

Obviously, soon she realises that looks aren’t everything.