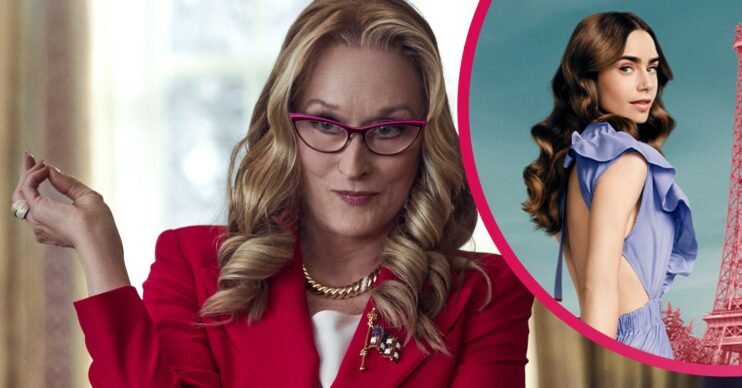 Netflix Christmas highlights 2021: What are the best festive films and series to watch in December?

There's schmaltzy, comedy and Meryl Streep as US President!

Netflix in December promises the return of Emily in Paris, and a black comedy with a Hollywood cast – so what are the best Christmas highlights on Netflix in 2021?

The streaming service never fails to deliver over the festive period – and it’s not all schmaltz and rom-coms.

Although we definitely want some of that soppy stuff too!

Here’s our guide to the best of Netflix’s Christmas schedules in our 2021 highlights.

Read more: Who is Daisy in Coronation Street and who plays her? Actress Charlotte Jordan starred in Netflix series

The Vampire Diaries actress Nina Dobrev stars in this lighthearted romantic comedy, which has Netflix and chill written all over it.

She portrays an unlucky in love LA girl Natalie who falls for an East Coast guy on a dating app.

Natalie decides to take a leap of faith and surprise him for the holidays.

She jumps on a plane and travels 3,000 miles – only to discover that she’s been catfished.

But will she subsequently find love?

Father Christmas is Back centres around four feuding sisters who re-unite for the Christmas holiday in a Yorkshire mansion.

They get a crash course in family togetherness when their long-lost father shows up for Christmas at their posh ancestral manor.

The result? They uncover the long-buried secret that tore their family apart many years ago.

We rest our case!

Read more: Who is in The Crown season 5? Full cast list so far as Netflix series changes line-up

It’s the third film in the franchise, so we know the drill by now.

In The Princess Switch: Switched Again, the pair met again with an added complication – a new lookalike, party girl Fiona!

It’s more of the same in The Princess Switch 3: Romancing the Star.

When a priceless relic is stolen, Queen Margaret and Princess Stacy enlist the help of Margaret’s audacious look-alike cousin Fiona.

She teams with a dashing, mysterious man from her past to retrieve it…

It wouldn’t be Christmas without an Aardman animation – this time a holiday musical special with a cute bird as the hero.

Robin is raised by a loving family of mice after her egg rolls into a rubbish dump.

As she grows up, her differences become more apparent.

Robin sets off on the heist to end all heists to prove to her family that she can be a really good mouse – but ends up discovering who she really is.

It’s like the Ugly Duckling for a modern age.

A Castle For Christmas – available now

Cary Elwes of The Princess Bride fame, and The Blue Lagoon star Brooke Shields team up in this cheesy offering A Castle For Christmas.

Brooke stars as famed author Sophie Brown, who travels to Scotland hoping to buy a small castle of her own.

However, the prickly owner, Duke Myles (Cary Elwes), is reluctant to sell to a foreigner.

Working to find a compromise, the pair constantly butt heads…

But they just may find something more than they were expecting.

And if you can’t guess what, check your pulse.

Although the word school can still bring back nightmares, the word chocolate is always a comfort.

In this new series, eight top pastry and chocolate professionals train at the School of Chocolate to take their skills and careers to the next level.

Single All the Way – available from December 2 2021

He plays Peter, who is desperate to avoid his family’s judgment about his perpetual single status.

So he convinces his best friend Nick (Philemon Chambers) to join him for the holidays and pretend that they’re now in a relationship.

But when Peter’s mother (Kathy Najimy) sets him up on a blind date with her handsome trainer James (Luke Macfarlane) – everything goes pear shaped.

A Naija Christmas is Netflix’s first ever Nigerian Christmas film.

The comedy follows three brothers who are all going through unique relationship challenges.

The three sons race to fulfil their mother’s wish to bring home wives for Christmas to ‘win’ a grand prize.

It sets off a fierce competition between them – but can they find love in the meantime?

This two-part special features comic Russell Howard’s delayed return to the stage and a look at his life during an unexpected lockdown.

It includes a stand-up comedy special, as well as a documentary mapping his attempts to keep performing throughout the Covid-19 pandemic.

Okay, so it’s not exactly Christmas themed but it’s got a man with white hair who could look like Father Chrimbo at a push.

Henry Cavill returns as Geralt of Rivia in series two of The Witcher – and things continue where season one ended.

Geralt of Rivia brings Princess Cirilla to the safest place he knows, his childhood home of Kaer Morhen.

Convinced Yennefer’s life was lost at the Battle of Sodden, he must protect the girl from the mysterious power she possesses inside.

Some people loved it, others hated it, but it sure did get everyone talking.

Emily in Paris is back for a second series, starting on Wednesday December 22 2021 from 8am.

Now more entrenched in her life in Paris, Emily’s getting better at navigating the city.

But she’s still struggling with the idiosyncrasies of French life.

After stumbling into a love triangle with her neighbour and her first real French friend, Emily is determined to focus on her work…

But even that is getting more complicated by the day.

Lily Collins – daughter of singer Phil – stars in what became Netflix’s most viewed comedy series of 2020.

Don’t Look Up tells the story of two low-level astronomers, who must go on a giant media tour to warn mankind of an approaching comet that will destroy planet earth.

They make an astounding discovery of a comet orbiting within the solar system.

The problem – it’s on a direct collision course with Earth.

The other problem? No one really seems to care.

Meryl Streep stars as President Orlean, a role she was born to play, opposite her sycophantic son and Chief of Staff, Jason (Jonah Hill).

Comedian Jimmy Carr finds humour in the darkest of places in this stand-up special.

Expect his trademark dry, sardonic wit – and some jokes he calls “career enders”.

This follows on from his successful stand-up show Funny Business, which is currently available to watch on Netflix, too.

If thrillers are your thing, then you’ll want to watch Stay Close which airs from New Year’s Eve.

It’s an eight-part series based on Harlan Coben’s book of the same name.

The question at the heart of the series is ‘how well do you really know someone?’

It follows three people who are all harbouring a dark secret…

But the past won’t stay buried.

What are you looking forward to watching over Christmas? Leave us a comment on our Facebook page @EntertainmentDailyFix.