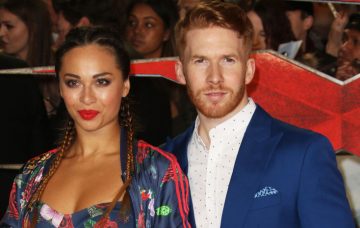 The professional dancer has apparently asked his wife to stay away

There’s taking the high road, and then there’s, er, everything Seann Walsh has done in the past few weeks.

After the comedian kissed Neil Jones’ wife during Strictly Come Dancing rehearsals and then bizarrely labelled him “gay” in public, insiders say the professional dancer has finally hit back.

A ‘source’ told The Sun: “Neil made angry comments backstage and complained about Seann to the other pro dancers.”

Neil, 36, has reportedly now told his wife, Katya, 29, to keep away from Seann, who she was paired with during this year’s series.

The source continues: “He had kept a dignified silence until now but he has also had words with Katya to tell her that once this final commitment is over he doesn’t want her to see or talk to him again.”

It followed Seann’s on-stage comments in front of an audience, where he talked about cheating with Katya and the aftermath, where he was publicly dumped by his girlfriend, Rebecca Humphries.

He said: “Before the show, the newspapers were complaining they didn’t know who I was. You know who I am now, [expletive]. I’m the guy who kissed a gay man’s wife.”

It was then claimed Neil wanted to confront his love rival over the comments and was “seething” over his wife becoming the butt of Seann’s jokes.

A Strictly insider reportedly said: “Seann wants to use his Strictly experience as the backbone of his new stand-up tour, which he is taking on a nationwide tour next spring.”