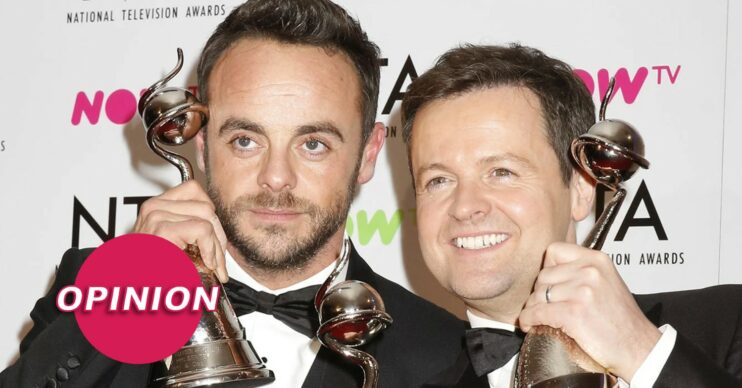 OPINION: ‘Ant and Dec didn’t deserve another win at the National Television Awards’

Maybe they should rule themselves out next year

The Geordie were up against the likes of Holly Willoughby, Piers Morgan and Bradley Walsh for the prestigious award.

Did they deserve it for another year running? In my opinion, NO!

National Television Awards: Who was nominated for Best Presenter?

In the running for the Best Presenter award this year were Holly Willoughby and Alison Hammond.

Piers Morgan was also shortlisted despite departing from Good Morning Britain in March.

Meanwhile, Bradley Walsh was nominated for his work on The Chase.

And you certainly didn’t need to be a psychic to predict what would happen on the night.

Why Ant and Dec didn’t deserve the award this year

I’m not denying that Ant and Dec don’t provide plenty of entertainment throughout the year.

As well as Britain’s Got Talent, they spend weeks hosting I’m A Celebrity… Get Me Out Of Here!.

Read more: I’m A Celebrity… Get Me Out Of Here! location is confirmed as Wales again

But does that really warrant 20 years’ worth of awards?

Personally, I believe the award should have been given either Bradley or Holly this year.

Bradley has become a TV staple over the years, hosting The Chase for more than a decade, and spin-off Beat The Chasers.

Meanwhile, Holly has plenty of adoring fans on This Morning every Monday to Thursday.

Surely they deserve the credit just as much!

Plus, did we really want another predictable ceremony?

In my opinion, it sucks all the fun out of the night knowing who’s going to take home the gong.

Do we really want yet another predictable ceremony?

I’d much rather have been shocked by this year’s winner instead of the pair delivering yet another soppy acceptance speech.

So, maybe it’s time that Ant and Dec hand over the credit to someone else – and actively rule themselves out.

Or is it up to NTA bosses to give it a rest and stop putting the pair up for the award?

Either way, they didn’t get my vote this year and they won’t be if shortlisted again next year.