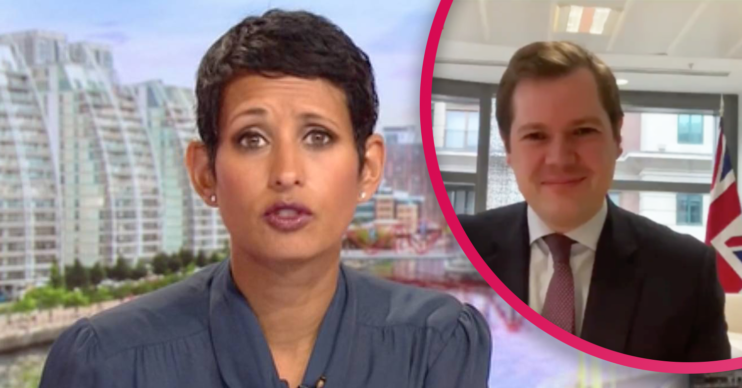 Naga Munchetty will not be punished for her part in the Union flag row, the BBC has confirmed.

The BBC Breakfast host came under fire earlier this year after complaints about her interview with MP Robert Jenrick.

Hosting alongside Charlie Stayt, the pair commented on the prominence of the flag in the background of his picture.

They also pointed out his portrait of the Queen.

So how many complained about Naga Munchetty and the Union flag comments?

Twitter was awash with complaints. Others complained to the BBC’s Executive Complaints Unit.

It revealed 16 viewers said it showed an “offensive lack of respect towards the monarch and the national flag”.

Furthermore, 11 of them complained about Naga‘s subsequent activity on social media.

She liked a number of tweets about the incident, for which she later apologised.

So what has the BBC said about Naga Munchetty and the Union flag row?

The BBC has released a statement about the incident. And it says it is “not upheld/resolved”.

It reads: “In an interview with the Justice Secretary Robert Jenrick from his office, Charlie Stayt and Naga Munchetty commented on the prominence of a Union Flag and a portrait of the Queen in the background.

“16 viewers complained to the ECU that this showed an offensive lack of respect towards the monarch and the national flag.

“11 of them complained about subsequent social media activity by Ms Munchetty, in which she ‘liked’ a number of Twitter comments about the incident expressing views to which they took exception.

16 viewers complained this showed an offensive lack of respect towards the monarch and the national flag.

“The ECU considered the complaints in the light of the BBC’s editorial standards in relation to offence to audiences and, for the social media activity, impartiality.”

So what actually happened on the show?

The statement then explained what happened on the show.

“Thanking Mr Jenrick at the end of the interview, Mr Stayt, referring to the Union Flag visible behind him, said: ‘I think your flag is not up to standard size Government interview measurements. I think it’s just a little bit small.’

Read more: MPs demand Naga and Charlie are reprimanded for being ‘disrespectful’ to the Queen

“It was evident from the laughter audible in the studio that the remark was humorously intended, and from Mr Jenrick’s smile that it was taken in that spirit.

“The brief exchange between the presenters after the interview, in which Ms Munchetty drew attention to the portrait of the Queen in Mr Jenrick’s office, continued in a jocular vein.

“In the ECU’s view, the target of the humour was the prevalence of patriotic symbols as a backdrop for ministerial interviews, not what those symbols represent, and any offence on the part of viewers arose from a misunderstanding of the presenters’ intentions.

“It therefore did not uphold these complaints,” it added.

I ‘liked’ tweets today that were offensive in nature about the use of the British flag as a backdrop in a government interview this morning.
I have since removed these ‘likes’.
This do not represent the views of me or the BBC.
I apologise for any offence taken.
Naga

The statement addressed that too. And we doubt the response will please those who complained.

It said: “In relation to subsequent social media activity by Ms Munchetty in her Twitter account, the ECU noted that she had liked a number of tweets which were disparaging of the government’s use of patriotic symbols (one of which used strong language).

“This risked giving the impression of endorsing one strand of opinion in a controversial area, and was in breach of the BBC’s standards of impartiality.”

It added that the rules apply to “social media activity” by BBC staff “engaged in journalism and factual programming (as well as being potentially offensive)”.

“However, Ms Munchetty had removed the likes before complaints about the matter reached the ECU, and posted an apology on Twitter which made clear that the tweets in question did not represent her own views or those of the BBC.

“In the ECU’s view, this sufficed to resolve the issue of complaint.”