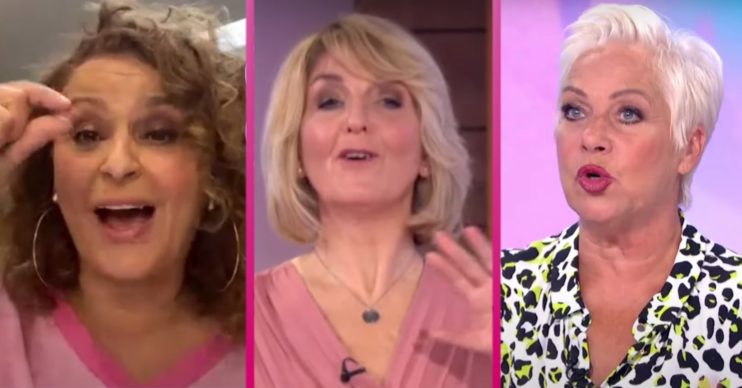 Loose Women: Nadia Sawalha snaps at co-stars as she demands to be heard during climate change debate

She would not be hushed up!

The actress snapped at her fellow chat show stars after host Kaye Adams tried to move the show on.

Nadia, Kaye and fellow pundits Denise Welch and Jane Moore had been pondering Prince William’s recent A Planet For Us All documentary.

The Duke of Cambridge’s climate change activism was being questioned – with some feeling it wasn’t appropriate to push the subject during the coronavirus pandemic.

But Nadia passionately defended the need for climate change to remain at the forefront of people’s minds.

And she would not be hushed up, demanding she be able to finished her point.

Denise had suggested green issues were not as important to those ‘struggling to afford to live in tenement blocks’.

But mum-of-two Nadia was adamant her kids are more concerned about conserving the planet than the virus threat.

With Denise having made her point, Nadia wanted to respond.

However, as Kaye spoke over her, she determinedly pushed back in order to have her say.

“Let me finish this!” Nadia snapped, holding up a finger as if to silence others.

“People who aren’t struggling, people who live in their lap of luxury are the people that have got to carry on the fight.

“They aren’t fighting every day to put food on the table!” she argued.

But returning to the Prince William angle, Kaye retorted: “Well, maybe a man with umpteenth palaces isn’t exactly the person to be heading this up.

“I don’t know if people are going to hear it from him, we’ll see!”

Moments earlier, Nadia admitted she felt guilt about not doing more to save the planet.

“I am ashamed of how little I do,” she said.

“And I think we need Prince William for the older generation. Because the younger generation are very happy with Greta [Thunberg] and her message that she puts across brilliantly.

“She has no ego, she has no other reason to do this than she is really scared for the future of her generation.”

Nadia later added there was no possibility for delay when it comes to addressing climate change.

“We haven’t got time to put it on ice,” she continued.

“We haven’t got time to say, ‘Oh sorry we are worrying about the pandemic.’ The pandemic is part of the climate crisis!”

Viewers were split on Nadia’s position, with some social media users supporting her and others criticising her.

“I really enjoy how you talk sense… why are you not fronting Loose Women?” one Twitter user asked.

Another congratulated her: “We’ve enough on our plate to worry about the planet. There’s always something to worry about but when there’s no food for your great-grandchildren maybe they would’ve wish you’d used this platform to raise awareness and support those that do. Well done Nadia.”

“Your words today on Loose Women about climate change were bang on!” agreed a third person.

But someone else remarked: “Nadia needs to get a reality check.”