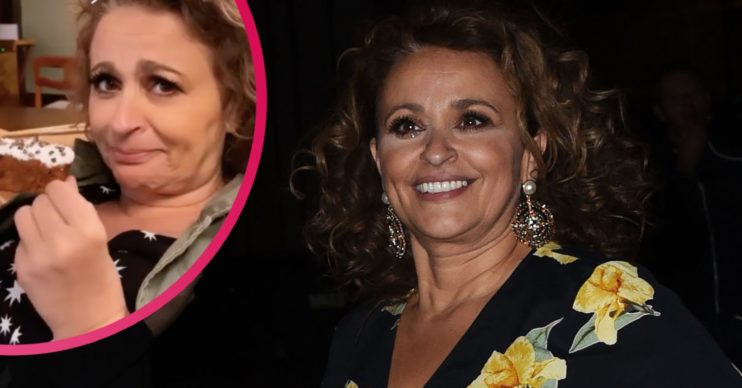 Nadia Sawalha from Loose Women was left fearing people think she is on a diet after an awkward encounter in a restaurant.

The presenter, 56, had popped out for a bite to eat with friends – including co-host Judi Love – after anchoring Friday’s show.

But after ordering a slice of cake, Nadia was handed just a teeny slice.

Brandishing the cake, Nadia said: “I feel a bit sad.”

Nadia continued: “I think they think I’m watching my figure.”

Thankfully, the mum-of-two saw the funny side and joined in with the laughter.

The second chapter of the ITV1 show’s ‘Body Stories’ campaign has seen the girls strip down to their swimwear.

They were then given control of Photoshopping their images, just to prove how easily pictures can be altered.

Four years ago, Nadia joined her co-stars for the first chapter, which saw them bare all in their underwear.

Speaking on Friday, she admitted she was previously ‘dysmorphic in her thinking’.

Recalling the first campaign, Nadia said: “I was awake a couple of nights before. I was in a total state.

“For my entire adult life before that Body Stories, I was dysmorphic in my thinking. I mean, really dysmorphic.

Nadia did, however, go on to explain the dramatic effect doing Body Stories had on her confidence.

“When I look now at my Instagram feed and what I put up, I cannot believe how far I’ve come in four years.

“I’m a different person because of that Body Stories campaign.”

Just to prove her point, Nadia has filmed herself doing a Kim Kardashian parody while wearing a crop top.

The star has recorded several similar clips in the past, all while showing off her body and mocking the US star.

One fan has replied to her latest one, saying: “You are absolutely hilarious. What a woman is our Nadz!”

Another wrote: “Brilliant! You are too much! I’m actually crying right now!”

Have you been inspired by Loose Women’s Body Stories? Leave us a comment on our Facebook page @EntertainmentDailyFix and let us know!