The show’s official Twitter account had confirmed former CBB winner Sarah Harding would be joining Rylan Clark-Neal on spinoff show Bit On The Side.

But when the programme began, there was no sign of Sarah…

Read more: Amanda Barrie reveals truth behind decision to do CBB at 82

And absolutely zero mention during the whole of BOTS about just what happened to her.

Well, viewers certainly thought so, taking to Twitter to question just where the Girls Aloud star had gone! 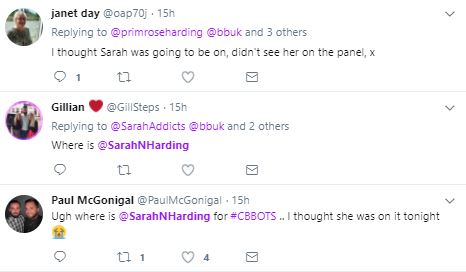 Sarah herself had even promoted the appearance earlier that day, retweeting a Big Brother fan account’s announcement of the spinoff show lineup.

So far, there’s been no word from Sarah on why she was unable to attend the taping.

Perhaps she was just unwell?

Or maybe Storm Eleanor caused havoc to her travel plans?

The 21st series of Celebrity Big Brother kicked off with a twist: an all-female cast of housemates to mark 100 years since women got the vote.

While it’s all ladies for now, the men will start to arrive from Friday.

The first confirmed gentleman to enter the house is former footballer John Barnes, while other males will reportedly include Boyzone’s Shane Lynch and Love Island’s Jonny Mitchell.