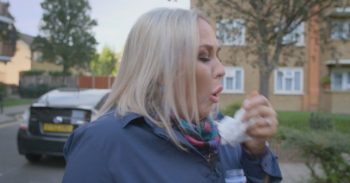 She couldn't believe what she saw

The mums, who all have teenage children, have the aim to create a film that promotes a healthy attitude to sex and relationships for the younger generation.

The programme, which aired last night, stunned many viewers after the mums watched hardcore videos and even got to witness the action live.

She went on to explain: “There are ways of cheating though. You can do flour and water mixture. Or Gaviscon as well.”

It was at this point that mum Sarah-Louise was taken aback and ran off set to be sick.

Read more: Police due to question journalist who debated transgender issues on GMB over Twitter ‘misgendering’

Mum-of-six Sarah-Louise then said: “I think it might be the bodily fluids bit that’s knocked me.”

Viewers of the controversial documentary have now voiced their views online, with many shocked by what they watched.

One tweeted: “We’d all throw up if some strangers bodily fluids were flying about the place let’s be honest #MumsMakePorn.”

A second commented: “Watching #mumsmakeporn on @channel4! What the hell is this?!!”

Another added: “Have I just turned the tv over to a parallel universe. Nah. Can’t be. #MumsMakePorn @Channel4.”

However, one viewer sarcastically tweeted about Sarah-Louise’s vomiting, adding: “Sarah Louise has six children? They *definitely* all appeared underneath a gooseberry bush. #MumsMakePorn.”

Watching #mumsmakeporn on @channel4! What the hell is this?!!

Have I just turned the tv over to a parallel universe. Nah. Can’t be. #MumsMakePorn @Channel4 pic.twitter.com/fElfX4RlQb

Sarah Louise has six children? They *definitely* all appeared underneath a gooseberry bush. #MumsMakePorn

Meanwhile, others applauded the show, branding it “absolutely fascinating”.

The five parents’ aim was to cast, write and direct an adult film they would be happy for their teenage children to view, instead of the more disturbing content that is widely available.

The series continues next Wednesday at 10pm on Channel 4.