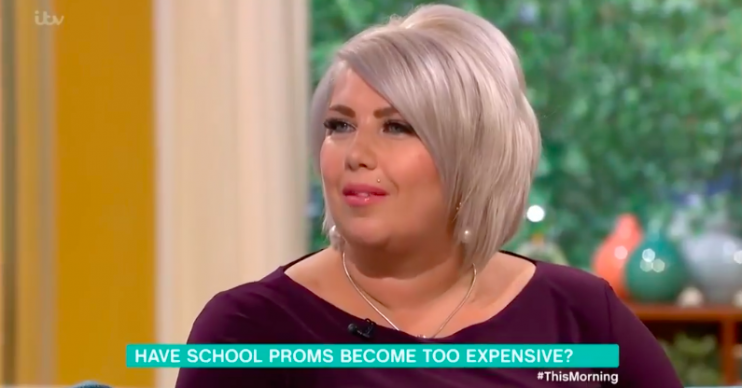 Mum slammed for spending £1,200 on her daughter’s prom – including teeth whitening

A mother has been criticised after admitting she spent £1,200 on her daughter’s prom night.

Clare Page appeared on This Morning on Thursday (July 11), and told shocked hosts Phillip Schofield and Holly Willoughby that she had saved for months to help her daughter feel like a “princess”.

Read more: Phillip Schofield and Holly Willoughby replaced by Eamonn Holmes and Ruth Langsford on This Morning over summer

But, far from being rich, Clare admits they couldn’t really afford it, with both parents in full-time employment and the daughter holding down two jobs.

Asked if the money came easily to her, she said: “Absolutely not. We work hard, both myself and my husband, we’ve got full time jobs and Rosie works as well.”

She said the family had the rule “you work hard, you play hard”.

She said: “Rosie had a very clear list from about year nine, with a Lamborghini being at the top of the list.

“The dress, the shoes, we had teeth whitening, lashes, make-up – the list went on. I hope she knows how lucky she is, because money doesn’t come easily to us, we have to work hard for that.”

Clare added: “I’m quite lucky in that I think Rosie is quite a grounded child, but I wanted her to be a princess for that day and have whatever she wanted.

“It was hard for us to save that money but, for me, I could justify that for her special day.”

However, comedian Jenny Eclair argued the other side, blasting the vulgarity of it.

She said: “It’s just ridiculous. All parents do daft things in the name of love, we all love our children to the point of blindness, I blame the schools, I think the schools shouldn’t partake in this.”

She continued: “You can’t trust parents to be sensible, none of us are sensible parents, we’ve all given in. I’m sick of this Americanisation. We can stop the prom, we can stop the baby shower.

“I know I’m being a bit of a professional misery guts here but I do think there are a lot of parents who are under horrible pressure.”

“I think teenagers suffer from a blight of ‘wannabe-ism’ and I think that it is horribly American and a little bit vulgar,” she added. “There is an essence of Trump in here which makes me uncomfortable because it’s that showy and vulgar.

“We didn’t call it prom, it was called a school disco, which there is nothing wrong with.”

The debate followed the news that a 16-year-old from Blackburn had made a jaw-dropping entrance to her end of year celebration, in a Rolls Royce Phantom covered in millions of crystals which cost a whopping £500 to hire for 15 minutes.

The UK prom business is currently booming – estimated to be worth a whopping £90 million a year.

Those watching from home were horrified by the expense, with one tweeting: “Spending £1,200 on your daughter for their prom is utterly crazy!”

Spending £1200 on your daughter for their prom is utterly crazy! #thismorning @thismorning

I feel sorry for the kids whose parents can't make ends meet, or who are disabled or a carer and who can't find £120 for a prom let alone £1200. Schools need to get a grip of this. #ThisMorning

Although, I have never liked the whole Prom thing but you can have a good prom just by spending a £100 that's how much my mum spent on my sister's prom last week and she looked just as nice as the girls who spent over £500. #ThisMorning

I think these days prom takes the shine away from your future wedding day. I understand celebrating leaving school is important but not at the price that it costs these days.

I think it’s more about those families who can’t afford to get the ‘best’ prom dress or the fanciest car etc.. the poor mums and dads who feel they have to compete with others! #ThisMorning

I do think that the whole prom business has gone too far. Yes, it should be different than other school dances but parents are expected to spend so much money and possibly put themselves in debt for it.

Another said: “I feel sorry for the kids whose parents can’t make ends meet, or who are disabled or a carer and who can’t find £120 for a prom let alone £1200. Schools need to get a grip of this.”

A third said: “Although, I have never liked the whole prom thing, you can have a good prom just by spending £100. That’s how much my mum spent on my sister’s prom last week and she looked just as nice as the girls who spent over £500.”

One more believed the end of year prom “takes the shine away from your future wedding,” while another added: “Teeth whitening for a school prom? I’d tell her to [bleep] right off.”

Do you think £1,200 is too much to spend on a school prom? Leave us a comment on our Facebook page @EntertainmentDailyFix and let us know what you think!