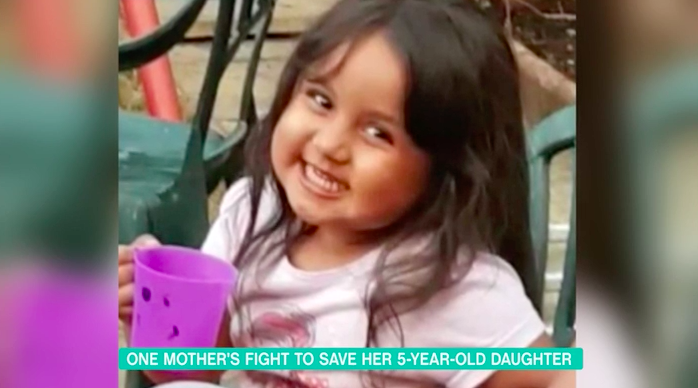 Who should decide when a child's life support is switched off?

Shelina Begum has appeared on This Morning, begging doctors not to let her five-year-old daughter die.

Tafida Raqeeb developed severe brain damage in February and has been on life support ever since.

At the time, her distraught mother was told she had a devastatingly low 1% chance of survival.

On Thursday (August 1), Shelina opened up the debate about who should decide when a child’s life support is turned off, as she strives to remove her daughter from the Royal London Hospital to a clinic in Italy.

Mirroring the tragic case of Charlie Gard, Tafida remains at the Royal London Hospital, as her parents face a battle to keep her alive and seek treatment abroad.

However, doctors at the hospital want to withdraw care.

Read more: This Morning guest insists grandparents should get consent before kissing grandkids

Speaking to Ruth Langsford and Eamonn Holmes, Shelina said: “Tafida is very stable at the moment, she is not dying, she continues to improve every day.”

Although the doctors who have been caring for Tafina insist there is no more hope for the little girl, Shelina says: “Yes, this is what the doctors are saying, but I don’t believe in that. A top neurologist has confirmed to us that Tafida needs to be given time.

“To wait one year for her to fully emerge and she has been doing that. She has a proper sleep and wake cycle and we have seen that, we have noticed that. Tafida wakes up every day.”

When Eamonn and Ruth mentioned that the doctors don’t agree with this, Shelina added: “That has not really been made clear to me, so I don’t really know why they don’t agree.

She added: “That’s what they’re saying – that it’s not enough improvement to sustain the life and I don’t agree with them.”

Tafida’s mother wants to take her ill daughter to a clinic in Genoa for treatment and the case will be heard by the High Court in September.

On travelling to see clinicians in Italy, the 39-year-old mum told Eamonn and Ruth: “They have said they can take Tafida and continue the treatment over there.

“Give her a tracheostomy, something that King’s College Hospital had promised us that, when we moved to Royal London, she would be given and that has not been the case.”

She went on: “I submitted an application to the court to challenge their refusal to release Tafida to another gold standard hospital and what they did was, within two hours, they went and rushed in with their best interest case to terminate Tafida’s life. So at the moment there are actually two cases running parallel to each other.”

According to doctors, Tafida cannot survive without a ventilator but Shelina insists she’s only on the “very minimal setting that she could possibly be on” and is not in any pain.

If the High Court rules against Shelina, she has vowed to go to the Court of Appeal.

A statement from Barts Health NHS Trust said: “This is a very sad case for which we are in touch with the family to offer support.

“Our expert clinicians caring for Tafida Raqeeb have determined in discussion with independent medical experts elsewhere in London that further invasive medical treatment is futile.

“As such we are insuring that we keep the family involved and uphold Tafida’s best interests recommending withdrawal of life-sustaining treatment and instigating palliative care.”

Tafida’s case bears similarities to that of Charlie Gard, who died in July 2017, after his parents lost their legal battle to take him to the US for experimental treatment they hoped could give him a “meaningful life”.

This Morning weekdays at 10.30am on ITV.

Should Tafida’s parents make the ultimate decision? Leave us a comment on our Facebook page @EntertainmentDailyFix and let us know what you think!