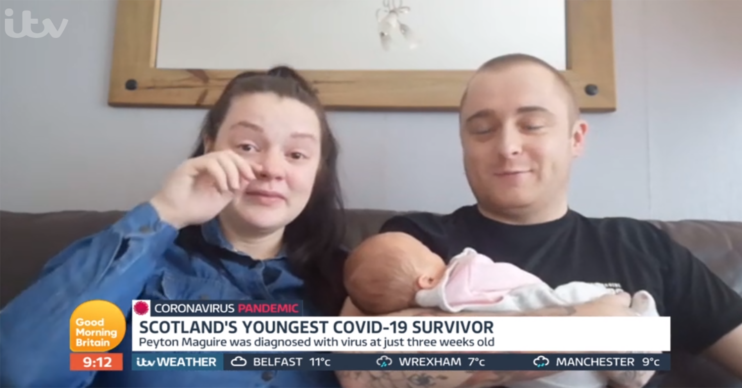 Peyton Maguire contracted the virus when she was three-weeks-old

A mum of a three-week-old baby who beat coronavirus was left in tears as she was sent a message from the NHS staff who saved her daughter’s life.

Little Peyton was born eight weeks premature after she was delivered by C-section last month.

She was diagnosed with COVID-19 at three-weeks-old on April 15 but thankfully, beat it.

The tot has now been discharged from hospital and is back home with her parents.

What did Tracey and AJ say on GMB today?

Tracey said: “She was just a day before three-weeks-old.

“We got a call in the morning and a doctor said Peyton has tested positive for coronavirus.

'If it wasn't for them, my wife or my daughter wouldn't be here right now.'

The father of Scotland's youngest Covid-19 survivor, AJ Maguire, shares an emotional message of thanks to the NHS staff who saved his daughter's life after she was diagnosed at just three weeks old. pic.twitter.com/aBjcvgOu7p

“We were absolutely gobsmacked.”

AJ added: “It was quite mind-numbing. It was a really dark time.

“But she’s absolutely fine now. Taking all her bottles and filling all her nappies.”

“I can’t thank them enough, they’re the real heroes. There’s no money or gift that can repay what they done.”

Meanwhile, host Lorraine Kelly then revealed they had a surprise for the couple.

The whole team who looked after Peyton sent messages to the couple.

Community midwife Sandra Coombes said: “It’s lovely to know you’re home and well, it was an absolute pleasure looking after you.

“I can’t wait to meet wee baby Payton when we’re all well and good again.”

In addition, Consultant neonatologist Dr. Caroline Delahunty added: “Tracey, AJ and Peyton, it’s just to say we’re all thinking of you these are difficult challenging times.

“Treasure each moment you have with Peyton and remain positive and thank you very much for all the feedback we’ve received from you.”