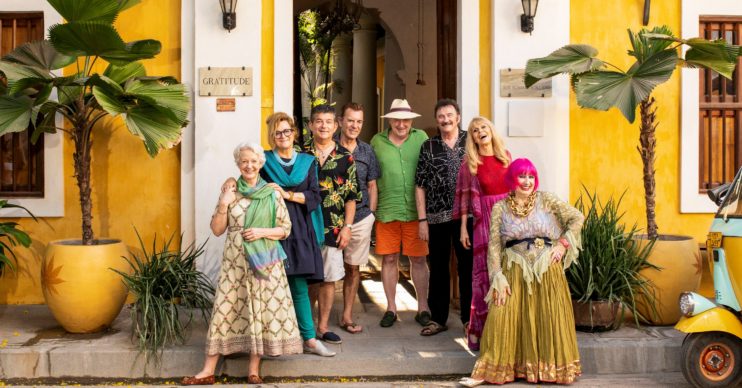 Fans looking forward to watching the second episode of The Real Marigold Hotel last night were instead met with a repeated episode of Mrs Brown’s Boys.

But after a successful opening episode, fans tuning in wanting to see what the gang got up to next were left disappointed.

The BBC put on a repeated episode of Mrs Brown’s Boys in its place.

Viewers were not happy and wanted answers from the Beeb as to why it wasn’t on.

Anyone know why the real marigold isn’t on tonight? #RealMarigoldHotel

Would love to know which idiot in @BBCOne scheduling decided to put episode 1 of #RealMarigoldHotel on last week, then have a 2 week gap before episode 2. Poor.

Hey @BBCOne, replacing #therealmarigoldhotel with Mrs Browns Boys tonight is unforgivable😡 Go to your room and have a good think about what you’ve done… #realmarigoldhotel

Why is it not on tonight? #realmarigoldhotel

Why was The Real Marigold Hotel not on?

Satirical news show Have I Got News For You was also moved from its usual Friday slot.

Friday night’s viewing on the BBC is VE Day commemorative programmes. It’s thought the anniversary is the reason for the shows moving around.

When can I watch the next episode of The Real Marigold Hotel?

The second episode will now air on Thursday, May 14 at 9pm, on BBC One.

Henry is looking for a cure for an old injury and finds yoga combined with western medicine has surprising results.

John and Susie try cooking a traditional Tamil feast, while Paul keeps out of the kitchen, but braves an Indian driving lesson.

They also head to the Chithirai festival and dress up in traditional outfits.

How was the first episode received?

The actor, who played Nasty Nick Cotton on and off from 1985 until 2015 when he was killed off, turned 68 in March. This makes him 67 when The Real Marigold Hotel was filmed.

Those watching at home were stunned into disbelief over how old he actually is.

He doesn’t look like he’s aged a day since we last saw him in Walford!

What else happened on The Real Marigold Hotel

Paul Chuckle also spoke movingly about his brother Barry, who died in 2018 after a battle with cancer.

“We constantly laughed on stage. He’d make me laugh, I’d make him laugh all the time. We just loved doing it.

“That’s gone forever. And that is the thing that upsets me more than anything.

“I will never have that on stage again, having a laugh with Barry. But life goes on.”