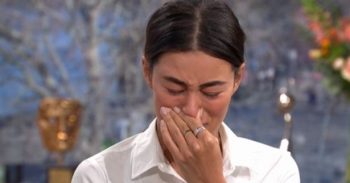 Montana Brown breaks down over final text from Mike Thalassitis

Mike was found dead on March 16

Love Island star Montana Brown broke down in tears as she opened up about her former co-star Mike Thalassitis’ tragic death.

Mike, 26, was found dead on Saturday morning in woods in north London after he took his own life.

Appearing on Monday’s This Morning, Montana became emotional as she said she didn’t reply to the final text message he sent her.

She said: “I’m kind of kicking myself, because he text me and I didn’t reply. Just because I’m really bad on my phone. I just wish I’d replied.

“He just said ‘How’s it going girl, how are you’ – and I didn’t reply,” before breaking down in tears.

Speaking about Mike’s tragic death, Montana said: “One of my friends texted me ‘I don’t know whether this is true, but Mike has taken his life’. I tried to call him and his phone went straight to answer phone.

On Sunday, Montana took to Instagram to reveal Mike had been in a “dark place” and turned to a self-help book before he died.

Montana, who appeared alongside him in the 2017 series of the show, admitted she feels “heartbroken” she was unable to help him.

She wrote: “I’ve thought long and hard about what I want to say, I’ve woken up and unfortunately this wasn’t just a nightmare so this is to you Mr Thala.

“Firstly, I’m so angry at you for doing this because you are so loved by so many people and I just wish you picked up the phone so we could’ve sorted this out. This didn’t need to happen.

“Secondly, it annoys me that you were so misunderstood. ‘Muggy Mike’ was your stage name and let’s face it, the ladies did fall at your feet BUT everyone had this impression of you and you were literally the opposite you were one of a kind.

“Mike, you were so thoughtful, caring and loyal to me and all your friends, you know some of my darkest secrets and I know yours. I could always rely on you to tell me when I’m being a nut job to Elliott and tell me to get off his case and I always told you to stop partying too much and getting too [bleep].”

She continued: “I just wish people had a tiny glimpse of what the real you was like.

“You sent me a Christmas card in the post this year, you checked up on me everyday at the beginning of this year when I was struggling myself, you really were the kindest, sweetest person and I am so devastated and crushed that I’ll never get to see you again.

“Now I know you were in a dark place a few months back and I thought you were past it and that you were on the up.

“I got you to buy The Magic [a self-help book], you wrote down your gratitudes, you had the pictures of your family in your car to remind you to be grateful for them. I just don’t know how I didn’t notice… I am absolutely heart broken that I couldn’t help you.

“Your phone call a few days ago to tell me that I’m smashing the swimwear, you’re proud of me and that you’re grateful for my friendship is the only thing that’s keeping me going right now.

“At least you knew how much you meant to me. I will help open your cafe with Scott because you worked so hard on it so don’t you worry!

“I can’t imagine how much pain you must have been in to do this, and the fact that you went through this on your own breaks my heart.

“I’m so so sorry I couldn’t do more to help you. I have so much love for you Mike and I will never forget you. Sleep tight darling and I miss you so much already.”