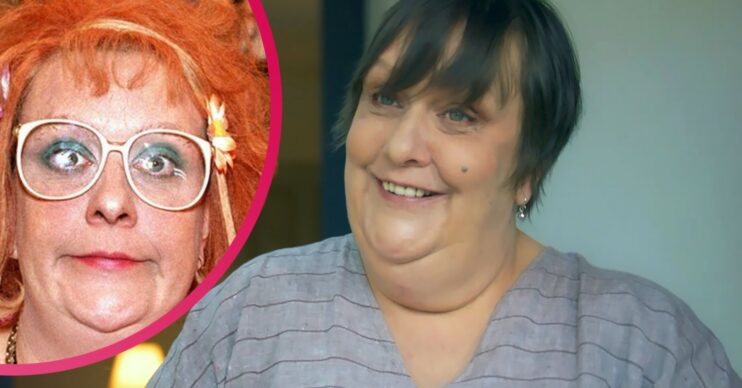 Money Talks on C4: How old is Kathy Burke, does she have children and what’s her net worth?

Kathy Burke takes a look at money and our attitudes towards it in C4 documentary Money Talks – so what’s Kathy Burke’s net worth?

How old is she and does she have children?

Here’s everything you need to know about Kathy, her career and her new doc.

Who is Kathy Burke and what is she famous for?

She’s been on our TV screens since 1982, when she appeared in the film Scrubbers opposite Pam St. Clement, Robbie Coltrane and Miriam Margolyes.

Kathy became famous appearing on sketch shows such as French and Saunders and Absolutely Fabulous, where she played Magda.

She played Linda La Hughes in the BBC sitcom Gimme Gimme Gimme, for which she received a British Comedy Award and two BAFTA nominations.

In fact, Kathy is just as potent in serious dramas and won Best Actress at the Cannes Film Festival  for her portrayal of Valerie in the 1997 film Nil by Mouth.

Kathy played Queen Mary I in the award-winning biographical film Elizabeth in 1998, and Connie Sachs in Tinker Tailor Soldier Spy in 2011.

More recently, Kathy starred as Miss Grizzlesniff in School of Roars, and presented the C4 documentary Kathy Burke’s All Woman.

Kathy Burke net worth: How old is she?

Kathy was born into an Irish family and has two older brothers.

Her mum Bridget tragically died of cancer when she was just 18 months old.

Kathy was brought up by foster carers for several years, until she subsequently returned to live with her Irish father, Patrick.

In 2007, Kathy Burke contracted Clostridium difficile while in hospital for an operation.

Clostridium difficile, also known as C. difficile or C. diff, is bacteria that can infect the bowel and cause diarrhoea.

Symptoms of a C. diff infection usually develop when you’re taking antibiotics, or when you have finished taking them within the last few weeks.

The most common symptoms are diarrhoea, fever, loss of appetite, nausea and tummy pain.

At the time, Kathy said: “I got quite ill with loads of stuff. It all happened at once, really.

“I had three near-death experiences [but] I didn’t see any white light or nuns or anything.

“I had that C. difficile hospital bug that everyone is going on about.

“It was an experience. There’s not much they can do. They just let you get on with it. It’s a breakdown of the whole immune system.

“To be fair to the NHS, I did catch the bug because something else was seriously wrong with me that nobody knew about.

“My adrenal glands were packing in.

“Once they opened me up and operated on me, I was susceptible to lots of other things.”

Kathy was forced to take nearly a year off work and lost two stone.

Does Kathy Burke have children?

Kathy does not have any children.

She chose not to have children and has no regrets about her decision.

She discusses this during her 2019 C4 documentary Kathy Burke’s All Woman.

She said: “I went through moody broody… Well, I met one person and I thought ‘if I am going to have a child with anybody it is going to be with this guy’.

“Anyway it didn’t happen because he had a girlfriend and I tried not to sleep with people if they had girlfriends.

“It was also really telling because I obviously didn’t want it desperately because I would have made it happen.”

She adds: “I look back and I have no regrets even though I love the babies.’

“I have no regrets about not having my own now.

“It can be seen as being quite selfish, but I’m very happy to be selfish. It is my life and that is what I chose to do with it.”

Kathy Burke isn’t married and has never been married.

In 2019, she told The Guardian that she is perfectly content being single.

However, she says she is open to the idea of a relationship and hasn’t sworn off them altogether.

According to Celebrity Net Worth, Kathy Burke’s net worth is around £2.5million.

She tells cameras during Money Talks that she “has a few quid in the bank”.

She lives in Islington, London.

Not bad for someone who admits she’s not the type of person to “work non-stop”.

Born into very little and now wealthy and successful, Kathy says she’s perfectly happy with what she’s got, and doesn’t understand why people worship money or feel they have to spend their lives earning ever more.

She says: “As someone who came from living in poverty in Islington to now owning a house there, I feel I’m a perfect person to look into one of the world’s most divisive subjects.”

The actor, writer and director travels the country to meet people at both extremes of the wealth spectrum.

In the first episode, she reunites with former comedy partners Harry Enfield and Paul Whitehouse to discuss creating their ‘Loadsamoney’ characters.

She also meets a wealthy businessman who grew up in poverty as a Romany gypsy.

Kathy subsequently meets TikTok stars who make hundreds of thousands of pounds a year from videos peddling a vision of wealth and glamour.

She talks to caravan parks millionaire Alfie Best and has a tour of his pristine house before he heads to work in his helicopter.

Kathy then meets a midwife Ruth Breen in Wigan who won the lottery but carried on working.

Gilly Greenslade, Commissioning Editor for Factual Entertainment at Channel 4, says: “We are delighted to welcome Kathy Burke back to Channel 4 to give us her unique and unrivalled take on something we Brits can find quite embarrassing to talk about, money.

“She is perfectly placed to infiltrate a range of worlds, and most importantly, she’s willing to ask the questions others wouldn’t get away with.”