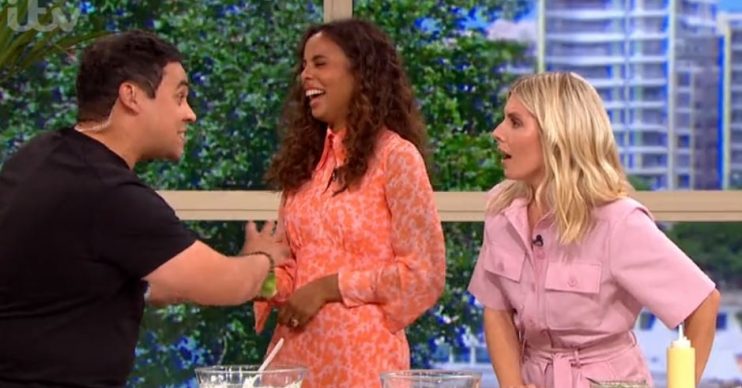 Mollie King had This Morning viewers crying with laughter after a mix-up involving lettuce and a dollop of tartare sauce.

The singer, who presented today’s (09.08.19) episode alongside fellow The Saturday’s star Rochelle Humes, was helping out during the cooking segment when she misinterpreted chef Paul Ainsworth’s instructions.

Mollie, 32, was in the studio kitchen with Rochelle and Paul, who had them making fish hot dogs, also known as ‘salty sea dogs’.

While he saw to the fish, Paul asked Mollie if she could start chopping up the lettuce and she joked, “Right, I think so…”

Once she had chopped a bowlful, Paul then asked her to add a spoonful of some tartare sauce he made earlier.

He meant add it to the chopped lettuce but Mollie, misunderstanding, happily added a dollop on top of the whole lettuce and awaited further instructions.

When Rochelle saw what her co-host had done, she could hardly breathe.

“Hang on a minute!” she burst out. “Was she supposed to put the sauce in the bowl?”

Paul laughed: “Honestly, Mollie. I’m loving your work. What have you done?”

One said, alongside a shocked-face emoji: “#ThisMorning Mollie OMG.”

Another, sharing a GIF of actor Chris Evans laughing his head off, tweeted: “Mollie, the lettuce in the bowl that’s chopped!!! #ThisMorning.”

A third wrote sarcastically: “Wow, I hope bookers for Celebrity Masterchef or Celebrity Bake Off are watching this and ready to sign Mollie King #thismorning.”

Molly, the lettuce in the bowl that's chopped!!! #ThisMorning pic.twitter.com/hOmtqc10Kr

Wow, I hope bookers for Celebrity Masterchef or Celebrity Bake Off are watching this and ready to sign Mollie King #thismorning

Still others, while in stitches, could fully understand the mistake.

Someone tweeted: “Omg that is exactly what I would have done with the lettuce. She wasn’t wrong though tbh #ThisMorning.”

Another said: “Oh Mollie. Don’t worry, you’re not alone. I probably would have done the same @MollieKing @thismorning #ThisMorning.”

“#ThisMorning I thought the exact same thing with the lettuce,” admitted a sixth.”

There to witness the gaffe were daytime TV legends Richard Madeley and Judy Finnigan.

The couple were back on the iconic couch and viewers loved having them on so much, they begged producers to give the pair a regular hosting slot on the programme.