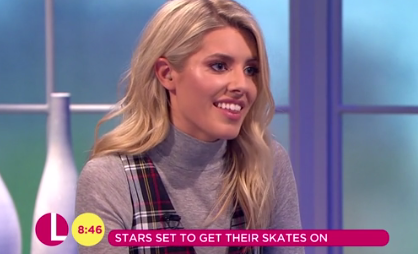 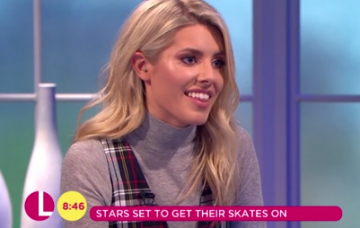 She'll be glued to her telly – with or without AJ

Once Dancing On Ice starts on Sunday night, you can bet your bottom dollar that it won’t just be the skating that makes the headlines.

Viewers love to see a bit of romance on these reality shows, so any sign of frisson between the contestants will be jumped upon.

Just ask Mollie King. Throughout the recent series of Strictly, she and her dance partner AJ Pritchard were the subject of ‘are they or aren’t they?’ rumours.

And appearing on today’s Lorraine, the Saturdays singer revealed that it could be “terrifying” at times, before giving some advice to the stars of the ITV ice-dancing show.

Presenter Lorraine Kelly started the conversation by saying: “I don’t think all those contestants have a clue what they’re letting themselves in for – not just on the ice, but all the attention.”

And Mollie, 30, agreed: “Yes, there’s definitely a lot of attention when you’re on one of these shows.

“Obviously, romance rumours and just everything that comes along with it. The scrutiny and being judged on national TV. It’s terrifying but it’s the most amazing experience.”

The Londoner stopped short of saying that she and AJ are dating, but did admit that they’re “close”.

After Lorraine said: “You two are great mates,” she replied: “Yes. You spend 12 hours a day together, and you do just become so close. You have to really trust your partner.”

She then offered some words of wisdom to the celebs who’ll be trying their luck on the ice rink.

She said: “That would be my tip: to just get on with your partner and throw everything at it, because it goes so quickly.”

Mollie did brilliantly on Strictly, finishing fifth. But by the sound of it, she wouldn’t fancy her chances of repeating the feat if she ever signed up for Dancing On Ice.

Read more: Opening night of Dancing On Ice has been thrown into jeopardy

She told Lorraine: “I found it hard enough to dance on the ground, let alone the ice. So I have so much respect for them. I can’t wait to see it!”