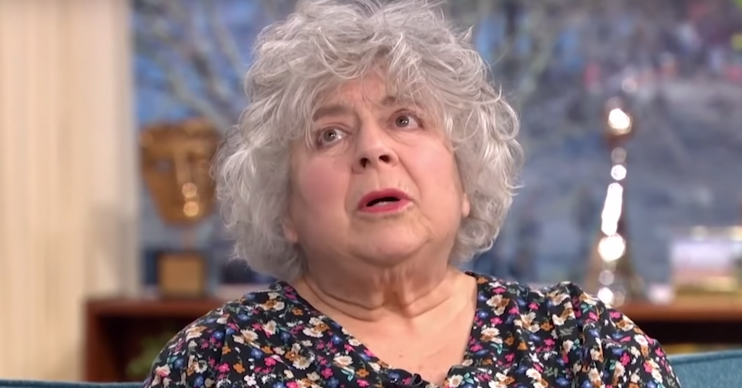 The Harry Potter actress, 78, was appearing on the ITV flagship show to discuss her programme Miriam’s Big Fat Adventure, which airs on BBC2 tonight from 9pm.

However, during the course of her chat, Miriam swore on a couple of occasions, leaving Phil and Holly forced to mouth ‘sorry’ at the camera.

She also took exception to Holly and Phil being euphemistic about using the word “fat”.

Following Phillip’s explanation that they would “be in a lot of trouble” if they used the word when Miriam wasn’t present and hadn’t used it herself, an incredulous Miriam scoffed at the apparent restriction.

“I’m sorry but I think that’s silly,” she replied before asking what the hosts would say instead.

With Phillip suggesting that “overweight” or “larger” might be permitted, the unimpressed star offered back, to chuckles: “Portly?! Roly-poly?!”

However, BAFTA-winning Miriam did stray into using different words not suitable for broadcast briefly turned the air blue as she admitted she was “[blank]ed off” with herself over her weight.

Just one of the many reasons we ❤️ Miriam Margolyes… pic.twitter.com/tFNCm8HIHL

But while the This Morning hosts were put in a slightly uncomfortable position, not many viewers at home seemed to care.

“#Thismorning we all love Miriam Margolyes she tells it like it is…even with a live swear word @thismorning,” one person tweeted.

“@thismorning Miriam Margolyes is wonderful, love how she says it as it is,” wrote another on Twitter.

Someone else added: “Brilliant interview with Miriam Margolyes on @thismorning – and she only swore twice! #miriammargolyes #ThisMorning.”

And a fourth said: “@thismorning can I just say Miriam Margolyes I absolutely LOVE her, she is my hero. She’s an absolute breath of fresh air. My mission in life is to be like her and middle finger what the world thinks about me. Please make her a regular.”

😂😂 I was wondering how long it would take #MiriamMargolyes to swear on This Morning, didn’t take too long. You’ve gotta love her. Phil and Holly miming sorry to the camera 😂 https://t.co/nJ8nxQjCX3

However, someone else moaned: “@thismorning get that woman off your show, she should know not to swear but she did it anyway. Miriam Margolyes is a pain.”

Miriam also discussed how her weight affects how she perceives herself.

“If I could migrate my whole personality and my face onto another body, I would be delighted!”

Miriam continued: “I’ve worried about my weight all my life and I assumed that everyone my size would feel the same. I wanted to see how people in the UK feel about our growing sizes, and what lengths people are going to, to try and deal with it.”

– This Morning airs on ITV, weekdays at 10am