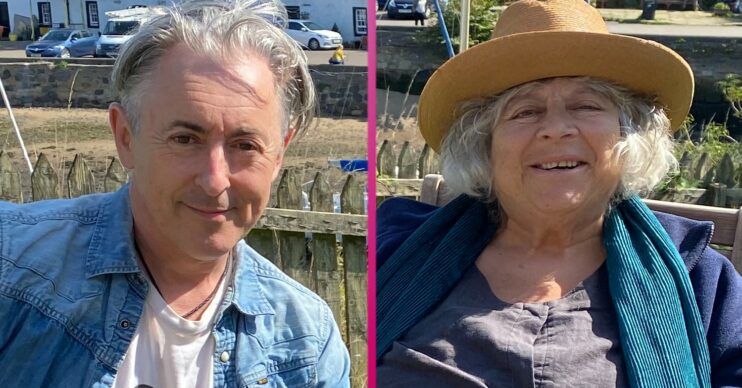 Miriam and Alan: Lost in Scotland – what’s it about and how many episodes is it?

We guarantee it's going to be raucous with Miriam at the helm!

The Call the Midwife actress and X-Men star Alan set off on a road trip the like of which has never been seen on British TV before!

Here’s everything you need to know about Miriam and Alan: Lost in Scotland on Channel 4.

Miriam and Alan: Lost in Scotland – what’s it about?

They start out in their one-time mutual home of Glasgow.

Although Miriam, 80, was born in Oxford, the actress visits the street where her Jewish family first lived in Scotland.

The pair then journey north into the Highlands.

Alan, 56, learns about his ancestral past at Cawdor Castle, and they meet up with fellow actor Bill Paterson.

Later, Alan takes us to his childhood home in Carnoustie where he remembers his abusive childhood.

He remembers the traumatic moment his bullying father cut his hair with a pair of shears.

Miriam and Alan: Lost in Scotland is three episodes long.

Each episode will be one hour long, including advert breaks.

Episode two follows the following week at the same time.

All episodes will be available to watch on All 4 after transmission.

Miriam and Alan: Lost in Scotland – where do they visit?

They visit Cawdor Castle, before travelling on to Carnoustie.

In episode three, the pair spend time in the garden of Lady Liza Campbell in Cawdor.

They also visit the Monifieth Golf Links, and Cockburns Butchers in Dingwall.

The pair subsequently meet farmer Euan Cameron at the Pittormie Fruit Farm in Cupar, and meet up with the Monifieth Amblers walking group at the Monikie Country Park – alongside Alan’s mum Mary Darling!

How do Miriam Margolyes and Alan Cummings know each other?

They didn’t! At least, not before teaming up for the show Miriam and Alan: Lost in Scotland.

Unless you count sharing the sofa on The Graham Norton Show a few years back.

However, Alan says of his new friend: “Intergenerational friendship is a very interesting thing that you don’t see very often.

“We’re an oddball couple, but we had a great time.”

Will you be tuning in to Miriam and Alan: Lost in Scotland on Channel 4? Leave us a comment on our Facebook page @EntertainmentDailyFix.