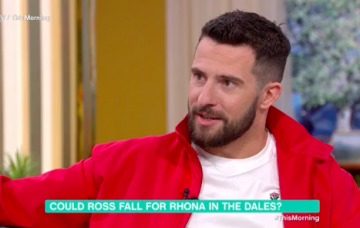 Say it's not true

Emmerdale actor Mike Parr has hinted that his character Ross Barton could be bowing out of the ITV soap in the not-too-distant future.

Speaking on This Morning, the star said he had ambitions to try his luck in America at some point.

He revealed to Phillip Schofield and Holly Willoughby: “I feel like I’ve had a big American influence in my life and I feel it’s always calling me.

“I think it would be so cool to do a year in New York and then maybe go for it in LA, see if I can get some work out there.

“I just want to be an actor that jobs, pops up in programmes here and there.

“I have no desire to be a huge star I just want to act.”

He went on to say that he’d stay in Emmerdale for as long as the writers keep on writing for him.

Ross is currently embroiled in one of the soap’s most controversial storylines after he became the victim of an acid attack.

Since the attack earlier this year, he’s struggled to cope and has now turned to prescription drugs to get him through.

But his brother’s girlfriend Rhona Goskirk has clocked his dependancy and is determined to help him kick the habit.

Mike Parr also teased that Ross could do the dirty on his brother Pete again and bed Rhona.

“He has a habit of sleeping with his brother’s partners!”

Will you be sad if Mike leaves Emmerdale? Let us know by commenting on our Facebook page @EntertainmentDailyFix!