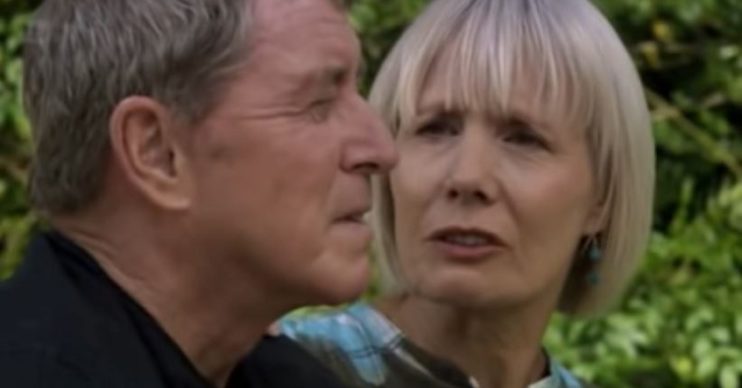 What was she really up to?

Fans of Midsomer Murders have voiced an odd theory about Joyce, the wife of former lead character DCI Tom Barnaby, after binging on ITV3 repeats of the hit detective show.

The latest series of the long-running drama got underway earlier this year with a string of episodes detailing the latest cases investigated by new lead DCI John Barnaby (Neil Dudgeon), who took over from his cousin Tom (John Nettles) in 2010.

But with the show currently on one of its usual long breaks, viewers have had to make do with repeats of old episodes in recent weeks.

Something odd about Joyce

And fans now think they have noticed something odd about the wife of former lead detective Tom.

Joyce, played by Jane Wymark, appeared in 81 episodes of Midsomer Murders aired between 1997 and 2011.

Discussing her character, one fan asked in a thread on the website Reddit if anyone had ever counted the suspiciously large number of murders she was connected to.

Her hands are always clean.

Another theorised in the replies: “I was thinking she has minions, underlings to do her dirty work. She pulls strings and makes secrets known to just the right people to drive them over the edge.

“But her hands are always clean. She’s at home, trying to make a balanced diet for her dutiful husband. But every once in a while, she likes to see the fruit of her handiwork and assure her alibi.”

Speaking further, the viewer wrote: “Notice whenever she witnesses something, she’s rather cool and sends her husband off. She knows ‘he has work to do’. And when Tom finally figured it out that it was his wife all along, he had to choose between love and duty.”

One of the new episodes to air earlier this year was a lively crossover with the BBC’s Strictly Come Dancing.

The series 21 opener, The Point of Balance, featured a touring dance show which, beneath its glamorous exterior, hid some rather nasty feuds that boiled over when one of the dancers was murdered.

A swathe of past Strictly contestants had parts in the episode, including actor Cassidy Little, former Steps singer Faye Tozer, ex Hollyoaks star Danny Mac, Natalie Gumede of Corrie fame and Tom Chambers, who has appeared in Holby City and Casualty.

What do you think of the Joyce theory? Leave us a comment on our Facebook page @EntertainmentDailyFix and let us know.