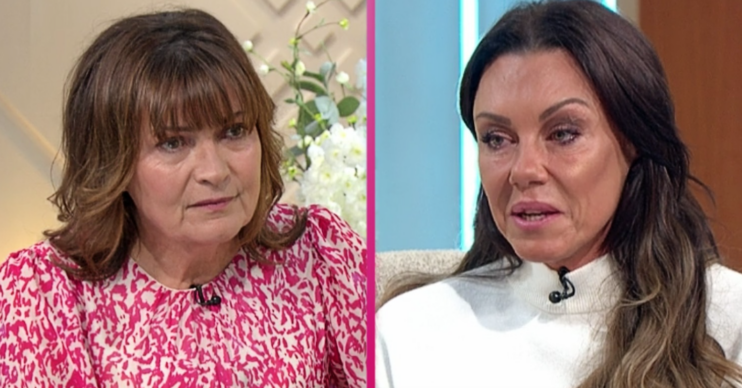 It was an emotional interview

Michelle Heaton apologised to Lorraine Kelly for drinking before her past appearances on the show.

Michelle, 42, courageously opened up about her addiction issues on the show this morning (Wednesday September 1).

But soon, she made an emotional admission that surprised everyone.

The interview began with a short film showing the mum-of-two and husband Hugh talk about her issues.

At the end of the video, she apologised to Hugh for everything she had put him and her family through.

And then, back in the studio, she said to Lorraine: “Just off the back of that, I wanted to say sorry to you because there were times when I drank before I sat on this sofa.

Read more: Michelle Heaton celebrates ‘100 days clean and sober’ with shocking before and after pictures

“And you trusted me, and I did campaigns for you, and I love you so much because you’ve always been there to support me.”

Tearing up, Michelle concluded: “And I wanted to say sorry.”

Lorraine, also emotional, said: “Don’t be daft, you don’t have to apologise to me or to anybody else.

“The easy path for you would’ve been to keep drinking; the hard thing was to say, ‘no I’m not going to do this anymore’.

“That takes real guts. You’re one of the strongest women I know.”

Michelle sunk into spiralling drinking problems after having a double hysterectomy and mastectomy.

During a recent appearance on Loose Women, she revealed the full, shocking extent of her addiction issues and the havoc they played with her health.

“I was told if I continued I would die but I still didn’t stop,” she said.

However, despite her experience, Michelle later revealed that she is now over 100 days of being sober.

And on Lorraine, she said she was feeling great.