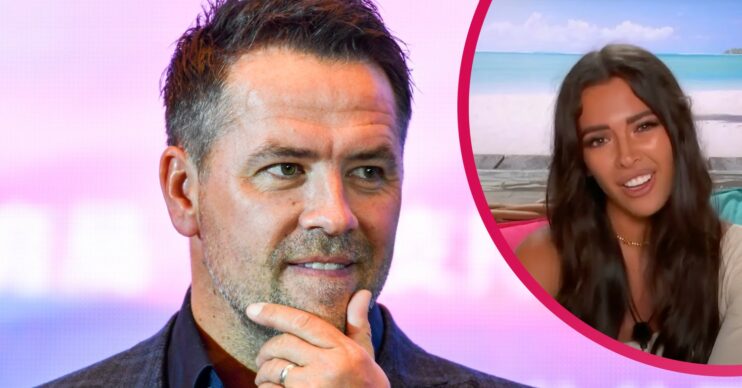 Michael Owen laughs off Love Island comments about daughter Gemma: ‘I came to Germany to avoid that’

Michael Owen has broken his silence after his daughter Gemma made her debut on Love Island.

Michael’s comments came as Gemma, 19, coupled up with Italian hunk Davide, 27, during last night’s episode of the show.

As you should well know by now, Michael’s daughter, Gemma, is currently taking part in Love Island.

Prior to the show starting, Michael described Gemma’s involvement as “a father’s worst nightmare”.

Read more: Love Island fans call for Gemma Owen to be ‘taken out’ of show because of age

At the beginning of the show, Jules introduced her fellow pundits for the game.

“A big night for the Owens last night Michael, how are you feeling today?” she asked.

Laughing it off, Michael said: “I came all the way to Germany to try to avoid all that back at home, and you’ve brought it up straight away.”

He then continued, saying: “I’m feeling alright thank you. Yeah.”

“This is taking my mind off it, so don’t bring it back up,” he added.

She’s only been on the show for two days, but Gemma has already got viewers talking.

Gemma is 19-years-old, making her one of the youngest contestants to ever appear on the show.

Plenty of viewers think that the dressage rider from Cheshire is too young to be on the show, looking for love.

“Nah somebody’s gotta get Gemma off. And the fact that she’s 19…” one viewer tweeted.

“Why did I just see that Gemma turned 19 in May!! Naa get her off that show lol. Wayyy too young,” another said.

“Ngl the minimum age for Love Island should be 21+. 19 is wayyyy too young,” a third wrote.

Gemma coupled up with 27-year-old Davide last night too – which will concern viewers even further.

Love Island airs every night at 9pm on ITV2 and ITV Hub.