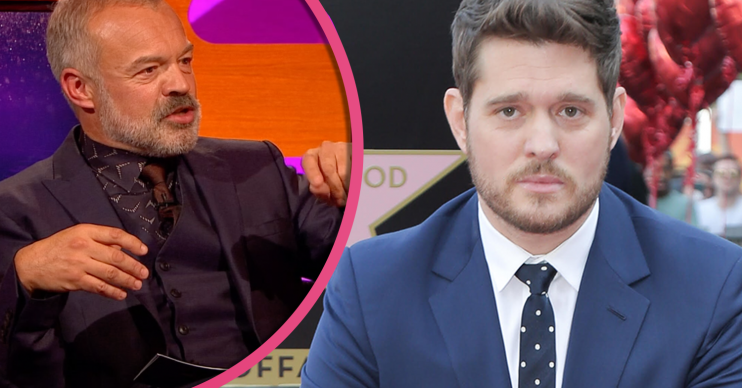 Noah was diagnosed with liver cancer in 2016

The Graham Norton Show returns to BBC One tonight, with singer Michael Bublé among the guests.

He’ll be seen speaking to Graham from the basement of his Vancouver home, where he’s currently on lockdown with his wife Luisana Lopilato and kids Noah, Elias and Vida.

During the talk show, which has been pre-recorded, Michael told Graham he’s feeling dad guilt due to being “not great” at home schooling.

The singer also opened up about his son’s cancer battle.

Noah, now six, was diagnosed with liver cancer back in 2016, with the star cancelling shows and withdrawing from the limelight to spend time with his family.

He has since thankfully got the all clear.

Michael – who was in the middle of a tour when the coronavirus pandemic struck – has likened lockdown to the experience of his son being ill.

Talking about being in the middle of a tour when the lockdown happened, he said: “It’s not much different to when we went through our own family health scare.”

Michael added: “Very quickly the work loses its meaning. For me, doing the right thing was the only option.”

He said: “I think I was one of the first artists to pull the plug and felt horrible about it, but I know I will make up the shows. The day they say: ‘We are all good,’ I’ll be back on stage.”

It appears the Feeling Good singer is a much better singer than teacher, too.

He told Graham of home schooling: “We are doing it, but I am not great at it. We are adapting and I’m learning new things.”

For me, doing the right thing was the only option.

Michael also admitted to feeling dad guilt when it came to the kids and technology.

“I felt guilty about the kids being on their iPads or watching TV until I muted the screen and turned the subtitles on,” he said.

Michael quipped: “Now, they are kind of reading – I killed two birds.”

Also on the show

Martin Sheen, Martin Freeman, Daisy Haggard and Celeste are also on tonight’s Graham Norton Show from the safety of their own homes.

You can watch the 30-minute show on BBC One, tonight at 9pm.