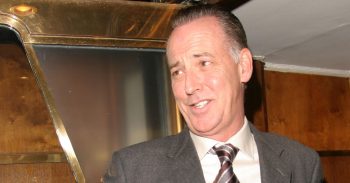 Michael Barrymore scheduled for return to ITV this summer

Piers Morgan is bringing troubled entertainer back to primetime

Michael Barrymore will return to primetime ITV as a guest of Piers Morgan.

The former light entertainment telly favourite, 66, is scheduled to appear on the Good Morning Britain presenter’s interview series Life Stories in the summer.

Strike It Lucky front man Michael – once known for his upbeat ‘Awright?’ catchphrase – is the first famous face to be linked with the new run of provocative celebrity chats.

And according to The Sun, motormouth Piers will pull no punches as he quizzes the My Kind of People host about his controversial life and career in the public eye.

A TV insider is quoted as telling the news outlet: “Michael is a huge name for the show and bosses hope that viewers will flock to see him.

“He’s had a very interesting life and, despite being away from the spotlight, there is a huge amount to talk about. Piers won’t be giving him an easy ride.”

Michael – who has also appeared in Celebrity Big Brother, Bob Martin and Celebrity Come Dine With Me – was arrested in 2001 after Stuart Lubbock was found dead in a swimming pool at his home in Essex.

He was later released without charge and sued police in 2017 for wrongful arrest.

Read more: The future of Call The Midwife revealed

He put his compensation claim at more than £2.4m in lost earnings but was awarded nominal damages.

In 2014 he was a guest on a celebrity edition of The Jeremy Kyle Show. Michael sobbed as he recalled the 2005 death of ex wife Cheryl during the TV heart-to-heart.

And last year he appeared in an ITV3 documentary about showbiz legend Larry Grayson, who Michael was the warm up act for when the variety entertainer presented The Generation Game in the late 1970s.

Michael said of the late star: “He fumbled his way through the programme, you were never sure he was going to get through to the end of the show in one piece. But he always did.”