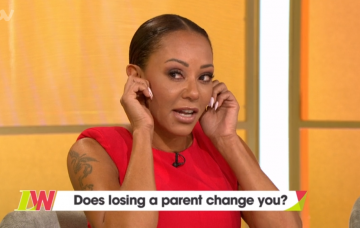 She lost her beloved dad to cancer in March last year

Mel B got emotional on Wednesday’s Loose Women as she opened up about losing her dad.

During a discussion about what it’s like to lose a parent, Mel revealed how Simon Cowell halted filming on America’s Got Talent so she could be with her dad before he died last year.

The Spice Girl revealed that she sadly had to miss her dad Martin’s funeral due to her contract with the show.

Speaking about why she had to miss the funeral, Mel told the panellists: “I had a contract with America’s Got Talent but Simon Cowell stopped the filming for three weeks so I could come and be beside my dad’s bedside.

“But it just meant that I had to just miss the funeral.”

As Mel started to become teary-eyed, Ruth Langsford asked her if she wished she could have attended his funeral.

“In theory. I mean it would have been really nice for me to be there, but I pray every day and think about him every day and that’s enough for me that I can handle,” she replied.

Mel lost her father to cancer in March last year.

During the discussion, the singer admitted her dad’s death is still very much raw.

“The pain never goes away,” she said. “Today of all days, I really miss my dad.”

Mel said the earrings she was wearing belonged to her father and she likes to wear them to “feel him” close to her.

“I believe that even though somebody passes on, I can still feel him around me,” she continued, getting emotional. “I still have a picture of him in my wallet and around my house.

“Even though he’s gone, I still want to think he’s still there watching over me.”

Mel told the panellists that she likes to think that her dad “sends her signs” or he “guides” her.

“I meditate quite a lot and I feel like he’s putting his arms around me,” she said. “It’s a weird thing but I miss him. A day doesn’t go by where I don’t think about him.

“I could be in a restaurant and I’ll just think of him and burst into tears.”

Joking about how her dad was a “very suave” man, Mel added: “I think at the funeral a few of his girlfriends showed up.

“My mum and dad were separated and divorced a long time.”