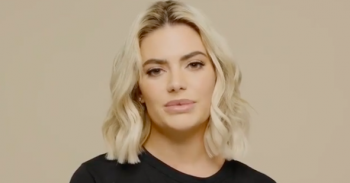 It’s been one of the most public break-ups of 2019 so far, and Megan Barton-Hanson still has plenty to say about ex Wes Nelson.

The Love Island star has reportedly branded her him a “scumbag” after discovering he’s been messaging reality star Amber Davies.

According to insiders at The Sun, Meghan, 25, said: “He’s so calculating. He’s been crying about me on telly, and the next minute sexting Amber.

“You can’t act the victim and then be sly on the side. He’s got one public image that’s very innocent, the golden boy, when really behind closed doors he’s the total opposite.”

She added, damningly: “He’s a scumbag. He’s selfish and calculating and it’s all for votes.”

Amber, 21, – who was on Love Island the year before Megan and Wes, 20, – admitted during a recent chat on Capital FM, that she was getting messages from someone on Dancing On Ice.

Although she didn’t confirm who it was, sources apparently told Megan it was Wes.

Megan and Dancing On Ice finalist Wes split in January. Things kicked off when it was claimed he’d got too close to his pro skater partner Vanessa Bauer.

It’s since been claimed by The Sun that the pair DID have a fling, but things have since cooled down. Vanessa denied the story, writing on Instagram: “Literally everything about this is a lie.”

When they split, Megan told OK! magazine: “Our ambitions and goals in life are very different. Wes is younger than me and wrapped up in the fame bubble – but I still love him, which is why it hurts so much. I fought and fought and fought for Wes but he doesn’t love me back.”

ED! has contacted Wes, Megan and Amber’s reps for comment.

Megan’s comments come a day after the reality star posted an emotional tribute to her gender on International Women’s Day.

In a video on Instagram she insisted: “This #InternationalWomensDay I’m supporting all women,” adding that she wanted to help give “women confidence and self-belief.”

Fans were quick to point out the hypocrisy of it after Megan’s many public digs at Vanessa.

One commented: “Says the girl who bullies other girls… 😂😂.” A second said: “The hypocrisy of it is laughable and scary at the same time.” A third added: “Wrong person to use… really… she has a horrible personality.”

Amber – who is currently starring in West End show 9 To 5 alongside Louise Redknapp – has yet to react on social media, but shared a cute picture of herself with the serene caption: “Thankful for the love and all of the above ☁️.”

Meanwhile Wes has just been posting updates from skating rehearsals ahead of tonight’s DOI final.