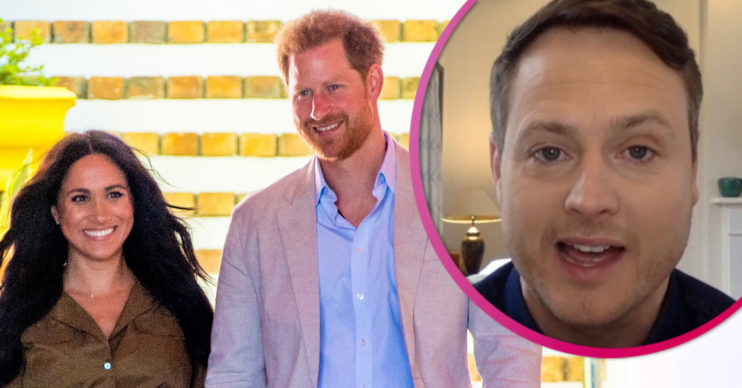 Will the couple release diaries?

In latest Meghan Markle news, Lorraine Kelly said she reckons the Duchess’ diary could be turned into a Netflix special.

Reports claimed the Duchess of Sussex kept a diary during her time in the UK.

On Wednesday’s edition of Lorraine, royal expert Russell Myers discussed the potential release of the diary.

Speaking about the diary, Lorraine said: “That’s going to be a book isn’t it or a TV special or a Netflix documentary.

“They’ve got this massive deal with Netflix and they have to do something for them.”

Mr Myers then said: “They’ve already pressed the nuclear button by going on Oprah, haven’t they?

What did the expert say?

“Meghan already had this lifestyle blog called The Tig before she was a royal, which was very very popular.”

He added: “She’s known to have kept a diary during her time within the Royal Family.

That’s going to be a book isn’t it or a TV special or a Netflix documentary.

“This would be absolutely bombshell stuff if she was to go and release it.”

My Myers said the couple could release diaries or a “tell-all documentary” if they “don’t get their way”.

Meanwhile, Lorraine continued: “To be fair, one of the things I think that is so sad is all of the good Meghan and Harry have done and could have done…

“But they are still very committed to work for charity and causes close to their hearts.”

Meanwhile, Meghan and Harry struck a deal with Netflix reportedly worth £100million following their exit from their senior royal roles.

Last weekend, they sat down with Oprah Winfrey in an explosive TV interview.

The couple made a string of revelations and claims which the Palace later confirmed an investigation into.

One included Meghan alleging there were ‘concerns and conversations’ within the family about how dark Archie’s skin colour might be when he was born.

Meanwhile, Harry also claimed he was “cut off” financially by his family when he and Meghan moved to Canada.

This week, Meghan’s friend Gayle King claimed on CBS This Morning that Harry has spoken to Prince William and Prince Charles.

However, she claimed the talks were “unproductive”.