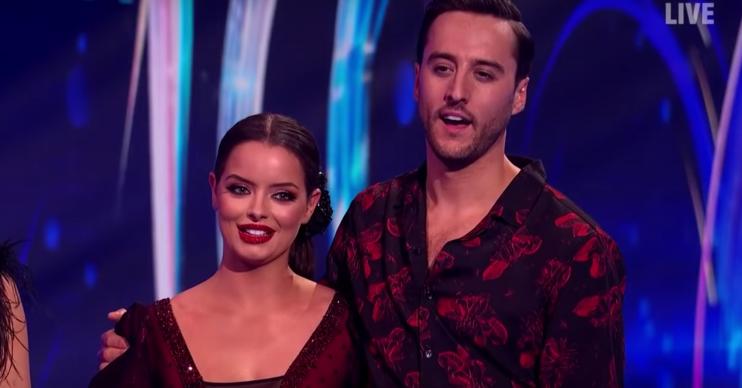 According to The Sun, the telly pair “spent several hours together” before he departed yesterday afternoon (March 14).

Last weekend, the newspaper reported Alexander and his wife of four years Carlotta Edwards were close to announcing the end of their relationship.

A source was said to have told The Sun on Sunday: “Alex’s marriage to Carlotta is all but over, after 11 years together. They are trying to put on a united front for now, but the writing is on the wall.”

Read more: John Barrowman reveals he wants to return to Dancing On Ice

“They haven’t been happy together in months, and Alex has been ­confiding in Maura about their personal problems, which hasn’t helped,” the unnamed insider is reported to have continued.

It came just days after Maura and her Love Island beau Curtis Pritchard announced they had split.

The latest round of rumours seemed to push Maura to comment on the allegations on social media this afternoon (March 15).

The 29-year-old ex-grid girl expressed her frustrations with her 154,000 followers.

Her message continued: “Me and Alex are friends and Joe and I are friends! YES I have more male friends than female! GET OVER IT!!!”

Maura and Curtis met on ITV2 dating show Love Island last summer and dated for eight months before calling time on their romance.

Confirming the break up in an Instagram Stories post, Maura wrote: “Curtis and I have made the decision to separate. We enjoyed a great experience from our time in the villa and want to thank everyone for supporting our relationship.

“There is no easy way to get through a break up and no bad feeling on either side. We tried to make it work but it wasn’t to be, and I wish Curtis nothing but the best for the future.”

And earlier this year, Maura spoke about how Curtis wasn’t bothered about Dancing On Ice’s reputed ‘show curse’.

Speaking on Loose Women, she said: “[Myself and Alexander Demetriou] spend every single day together, we have to get on.

“I don’t think [Curtis] worries. I’m lucky because Curtis is from the dancing world so he knows you need to have a connection.”