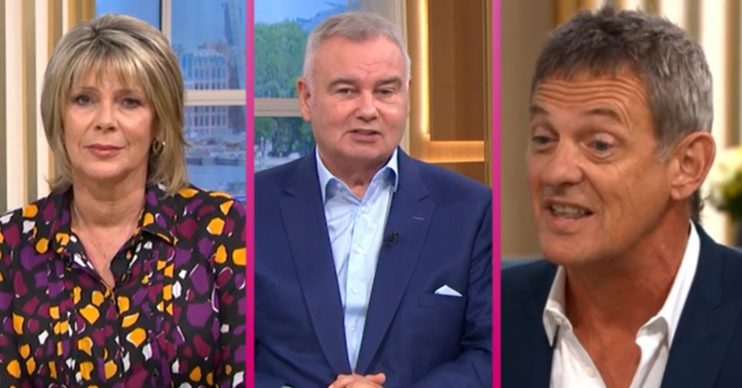 Matthew Wright responds to hair jokes after This Morning appearance

He has defended his unusual style

Matthew Wright has responded to jokes about his hair after his appearance on This Morning.

He was the studio to take part in This Morning’s View alongside hosts Ruth Langsford and Eamonn Holmes, with Afua Adom via video link from her home.

But the topics being discussed weren’t paramount in viewers minds as they pointed out Matthew still hasn’t got rid of his mullet.

What has Matthew Wright done to his hair?

It’s not a mullet.

A few weeks ago Matthew’s hair was the talk of This Morning as he appeared with Holly and Phil and fans wondered what was going on with the longer bit at the back.

At the time, Matthew joked his wife, Amelia, would be furious, blaming her for the new do.

But despite barbers and hairdressers now having been open for a number of weeks, Matthew has opted to keep his hair as it is.

What did fans say about Matthew Wright’s hair?

Viewers couldn’t get over the look on Twitter. They joked he was bringing back the mullet.

They also said it was ‘business at the back and a party at the front’ in several funny memes!

Business and the front and party at the back .That is Matthew rights hair today #ThisMorning

Matthew is back with his mullet bringing Tiger King vibes. Waiting on his ‘head & shoulders’ campaign #ThisMorning pic.twitter.com/5WeVRFIkyK

Matthew once again fired back at the hair critics, insisting: “It’s not a mullet btw. It’s a rat tail.”

It’s not a mullet btw. It’s a rat tail x

So clearly, he’s a fan of the style and intends to keep it!

He also responded to the memes with crying with laughter emojis, suggesting he’s not taking any of the comments too seriously.

What topics did Matthew discuss on This Morning today?

Matthew and Afua talked about the new Meghan and Harry book, Finding Freedom.

Matthew said he believed despite their denials Harry and Meghan had cooperated with the book indirectly by allowing their friends to talk to the writers.

They also discussed the war on obesity and calls for face masks to be made mandatory in secondary schools.