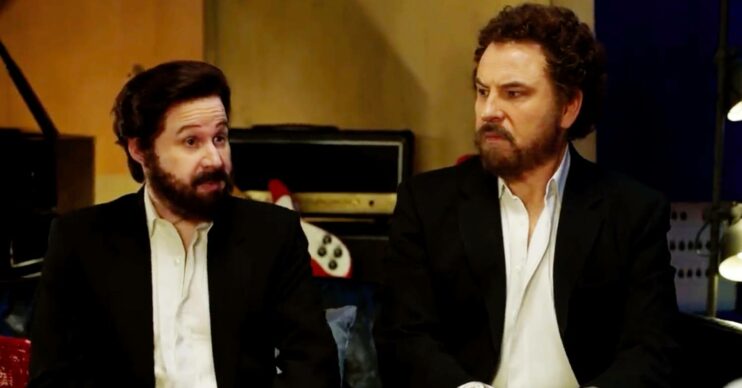 The comedic duo resurrected their Rock Profile sketch for Red Nose Day, 13 years after it was last seen.

But while some devoted fans were delighted to see them take off music superstars once again – and wanted to see even more instalments – others weren’t convinced.

Those who weren’t impressed even went as far to describe the sketch as “excruciating”.

They were joined by Vernon Kay for the skit, in the role of the interviewer previously played by Jamie Theakston and Dermot O’Leary.

Great British Bake Off host Matt said ahead of the sketch airing: “It’s been really fun giving the Rock Profile treatment to a host of stars who weren’t even twinkles in our eyes when we first did the show nearly 25 years ago.”

However, not everyone watching at home agreed or had as much fun as Matt.

Some Rock Profile fans felt the passage of time hadn’t been kind to the set up.

“I used to love Rock Profile back in the day but this #ComicRelief revival really isn’t hitting the spot,” one social media user reflected.

“I was looking forward to seeing it back but they should’ve left it in the past tbh.”

Someone else agreed: “Loved Rock Profile back in the day but sadly this was a miss for me, fellas.

“Appreciate you bringing it back for a good cause but think I only raised a chuckle twice, both at Adele.”

Another Twitter used summed it up: “Erm, I used remember #RockProfile being funny.”

And another person concluded: “#RedNoseDay2022 Rock Profile a rare miss on otherwise fab program as usual.”

Other viewers, however, were less forgiving with their assessments.

Someone else echoed that thought: “Terrible Lewis Capaldi patter on Rock Profile #RedNoseDay.

“Might as well have been saying ‘och aye the noo’ with haggis, Irn Bru and deep fried Mars bars thrown in.”

And yet another person complained: “This is ruining the Rock Profile legacy once again, oh dear!#RockProfile is the cringiest thing I’ve ever heard, please don’t bring this [blank] back ever.”

What a truly incredible figure. Thank you SO much to everyone who has supported this #RedNoseDay. Your donations will help us to change lives in the UK and around the world. pic.twitter.com/mElf6qgKYA

Calls for a new series

But not everyone had such extreme reactions – and there were also calls for Matt and David to devise new episodes.

Any chance of a new series? Please!

And a third requested: “Loved Rock Profile tonight… and all for a good cause too! Any chance of a new series? Please!”

“I don’t know how @vernonkay kept a straight face and @RealMattLucas as @Adele was bloody hilarious.”

And someone else contributed: “The Rock Profile sketch was hilarious. I loved the show anyway and didn’t think it would still work but I did think that was genius.”