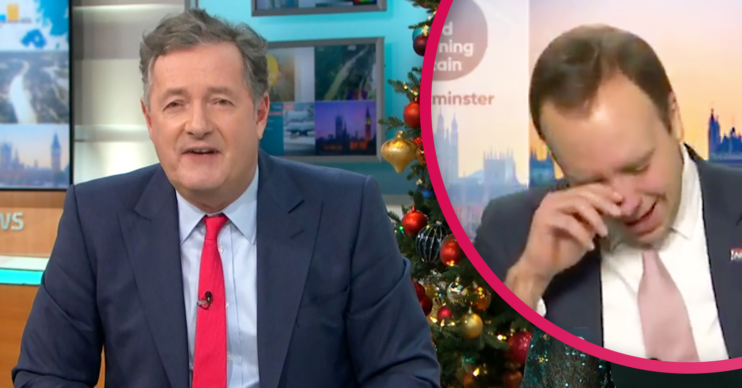 He wiped away a tear and stumbled over his words

Matt Hancock has been seen crying on Good Morning Britain today as he spoke about the roll-out of the COVID-19 vaccine.

The health secretary appeared on the ITV morning show today (December 8) after the first two people in the world received the vaccine.

Margaret Keenan, 90, became the first person in the world to be given the Pfizer vaccine.

She smiled from behind her mask as her jab was administered at her local hospital in Coventry.

William Shakespeare, 81, was the second person to be vaccinated.

Speaking about the vaccination roll-out on GMB, Hancock said it made him “proud to be British”.

He also got teary as he spoke about the “tough year” Brits have endured.

He wiped a tear from his eye and stumbled over his words as he spoke to host Piers Morgan.

After watching William Shakespeare get his jab, Piers said: “You’re quite emotional about that?”

Hancock revealed: “You know, it’s been such a tough year for so many people.

“We can get on with our lives. And there’s still a few months to go.

“I’ve still got this worry that we can’t blow it now, Piers.”

Hancock had earlier told Sky News: “This is a triumph for science and ingenuity over what is an absolutely beastly disease.

“I always believed by backing the science we would get there. This will start to heal this disease right across the world.”

Health Secretary Matt Hancock becomes emotional hearing the words of the first man in the world to receive the vaccine, William Shakespeare.

He tearily says ‘it makes you so proud to be British’.@piersmorgan| @susannareid100

Naturally Twitter erupted at the sight of the health secretary in tears.

And many accused the politician of “acting”.

You know, it’s been such a tough year for so many people. We can get on with our lives.

“I don’t think I’ve ever seen such horrendous acting,” said one.

“He wasn’t emotional or teary at all. It was an act (probably to get an easy ride in the interview and to pretend he cares about us little people). Why did Piers fall for it?” another asked.

“He’s worse at fake crying than he is at being health secretary!” declared a third.

“That is the fakest act I’ve ever seen,” another declared.