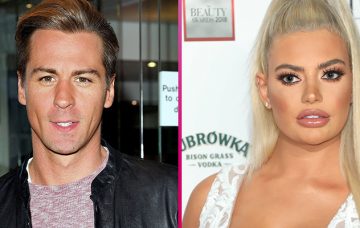 Matt Evers has hit out at Megan Barton Hanson after she claimed her boyfriend Wes Nelson’s Dancing on Ice outfits are “so not manly”.

The 42-year-old pro skater – who is partnering Gemma Collins in this year’s series – has slammed the Love Island star for criticising the show’s wardrobe, insisting there is “nothing unmanly about Dancing on Ice”.

He wrote on Twitter: “Hmmmm Megan…. don’t think picking girls up for a living and wearing Lycra…. is unmanly or cringey (see second pic).

“This show is my career and my passion. It’s unfair to criticize this show and the work we are all putting in. There’s nothing unmanly about @dancingonice (sic).”

Matt’s comments come after Megan admitted she was “nervous” to see Wes – who she met on the ITV2 dating show this summer – wearing tight sequinned outfits on the ice, and said she is going to “cringe so hard” watching him on the programme.

When asked if she will go to the studio to support him on dance nights, she replied to The Sun’s Fabulous Magazine: “Do you know what? I’m nervous to see him in sequins. I think I’m going to cringe so hard. That is so not manly.

“So we’ll see how it goes. First week, if he’s not absolutely repulsive and cringing me out, I might go back.”

Megan also admitted she finds it hard to watch the “ballroom faces” the skaters pull on the ice.

She added: “It’s the ballroom faces they do. I can’t watch that.”

But Wes hasn’t been hard at training recently as his pro partner Vanessa Bauer admitted last week that he has missed some sessions while on holiday in Mauritius.

She said during an appearance on This Morning: “Well rehearsals are going well whenever we are on the ice training.

“He is very, very, ambitious and he is very talented as well. He really wants to get far in this competition and he is so tight on his schedule.

“He has so many appearances everywhere; he is so high-on demand which is amazing for him! He is in Mauritius at the minute on holiday.”

What did you think of Matt’s response to Megan? Leave us a comment on our Facebook page @EntertainmentDailyFix and let us know!