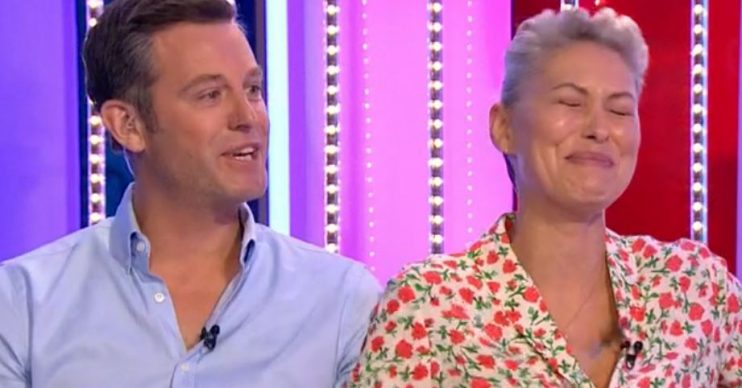 Presenter Matt Baker left Emma Willis stunned with a revolting joke on The One Show.

During Wednesday night’s (28.08.19) episode, the co-hosts swapped tips for keeping valuables safe while on holiday as they chatted with guests Holliday Grainger and Ben Miles, stars of new BBC drama The Capture.

Matt spoke about people tricking burglars by wrapping jewellery in tinfoil and leaving it in their freezer when they go away.

Emma then came out with a rather odd tip for hiding possessions at the beach.

She said: “Another one, when you’re on holiday on the beach and you can’t look after your stuff. If you want to go and have a swim, put everything in a nappy. Because no one’s going to tend to go in there.”

Holliday, clearly impressed, called the idea “genius” and insisted she would use it herself, as Emma admitted it’s one of her “favourites”.

Matt then chimed in: “Bit of chocolate spread on there, for extra security.”

Those in the studio burst out laughing and Emma, shocked, exclaimed: “Matt!”

But Matt demanded with a grin on his face: “What? I’m just saying…”

It follows dramatic scenes on The One Show last when a guest was forced to make a swift exit in the middle of the programme.

Matt was torn from his presenting duties when EastEnders actress Bonnie Langford was rushed from the studio and bundled onto a waiting motorbike.

She was on to chat about her theatre work, telling Matt and stand-in host Angellica Bell that she had to be at The Savoy Theatre straight after her interview for her performance in 9 to 5 the Musical.

At one point in the conversation, Matt and Angellica were interrupted by guest Fred Sirieix of First Dates fame as he arrived carrying a motorbike helmet and said: “Terribly sorry, but Bonnie’s got to go to the theatre now.”

In the latest installment of The One Show, Emma Willis was standing in for Alex Jones.

The Welsh presenter is still on maternity leave following the birth of her second child, Kit, in May.

What did you think of Matt’s “chocolate spread” comment? Head over to our Facebook page @EntertainmentDailyFix and let us know.