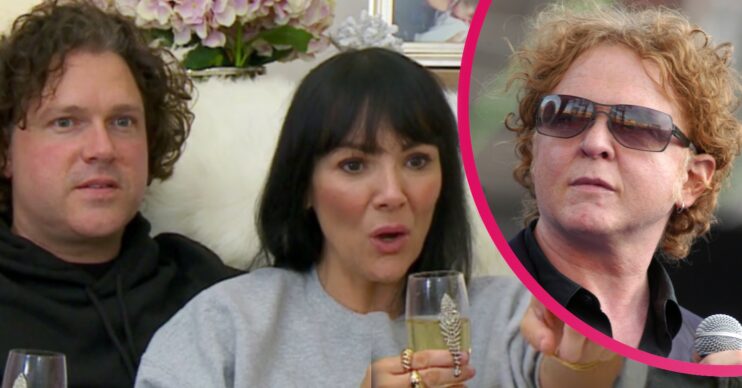 Martine McCutcheon and her husband have left some Celebrity Gogglebox viewers a tad confused.

Some have remarked on how similar Jack McManus looks to her ex boyfriend, Simply Red star Mick Hucknall.

One viewer tweeted: “I had no idea Mick Hucknall and Martine McCutcheon were dating! #CelebrityGogglebox #Gogglebox.”

Another viewer tweeted: “Still can’t get over how much Martine‘s husband looks like a black haired version of Mick Hucknall. #CelebrityGogglebox.”

Martine and the Simply Red singer dated back in 1996 – long before the former EastEnders actress coupled up with her now husband Jack.

She went on to claim that she was so nervous on her first date with Mick that she vomited in his hair.

And he was forced to chop off his infamous dreadlocks as a result!

However, Mick took offence to the anecdote, and went on to Twitter to deny certain details of the story.

And he claimed that his hair remained firmly intact.

In 2016 he tweeted: “Time to stop dining out on a lie @martineofficial. You vomited all over my driver’s car, not my hair. He was furious.

“@loosewomen @martineofficial You were so paralytic we had to put you to bed. As he will attest to. It’s a cheap, face saving story.”

But Martine then lashed out at Mick in an interview with new magazine.

She declared: “I got the length of his hair wrong but the rest of it is completely right and I stand by what I said.

“I don’t know why he wants to rewrite history, but there you go. It’s my embarrassment, not his, so I don’t know what the issue is.”

Who is Martine McCutcheon married to?

Martine’s husband is Jack McManus and they’ve been married since 2o12.

They share a son, Rafferty together, who was born in 2014.

He’s written songs for the likes of Boyzone and toured with John Mayer, Scouting for Girls, Amy MacDonald and Sam Sparro.