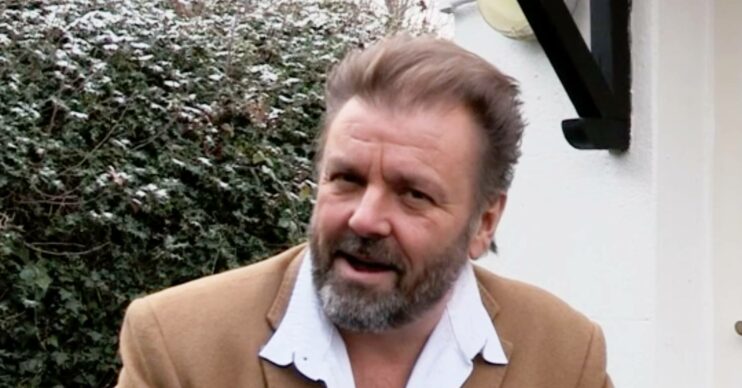 He was expected to remain in hospital for two weeks

Martin Roberts has provided fans with an update on his illness after suffering a terrifying scare with his heart.

The Homes Under the Hammer star, 58, was hospitalised earlier this month after suffering chest pains.

Martin then underwent an emergency operation, with the TV star claiming he was informed he may have had just hours to live.

But how is the BBC One presenter recovering now?

Martin initially let fans know about his health concerns in a video shared on social media on Thursday April 21.

Expressing his gratitude to be “here to tell the tale”, Martin explained: “I ended up in hospital in Bath yesterday.

Read more: Martin Roberts reveals he was rushed to hospital with ‘hours to live’ before having surgery

“I had a few chest pains and just feeling generally lousy, so I was brought in here. And it turns out I had a massive amount of fluid all around my heart, which was actually stopping my heart working.

“Had they not got rid of it, which they did in an emergency operation last night, then it’s quite serious. Like, hours to live kind of thing.

“So here I am, still around, thank goodness.”

On the Friday (April 22), it was reported Martin – who just weeks earlier drove across Europe to deliver supplies to Ukraine – might have to stay in hospital for another fortnight.

They think it might have started with a serious lung infection.

He told The Sun: “I’m being transferred to the respiratory team today as they think it might have started with a serious lung infection.

“I may be in hospital for another two weeks.”

Martin went on to praise medics for their rapid actions on Monday April 25 during an appearance on GMB.

He also explained he was still awake during surgery as an 8in syringe was plunged into his chest, draining half a litre of fluid.

The property expert also revealed how he had been distributing heart rate monitors in an Ukrainian refugee centre only days beforehand.

And show host Richard Madeley admitted he was “concerned” about Martin during a previous GMB appearance as he spoke about his aid dash to Ukraine.

Richard told Martin: “You had driven pretty much non-stop across Europe to get there. And although you gave a very good account of yourself you looked exhausted.

“You then came home and this terrible health crisis just suddenly fell out of a clear blue sky.”

One week on, Martin shared another development in a video address with his followers.

On Thursday (April 28) he had some good news to share – he’s been discharged seven days after going into hospital.

He said: “The hospital did an MRI scan on my heart this morning and found that I did have a few essential residual problems that they’re going to check over the next few months to check they don’t get any worse, hopefully, they get only better.

“The breathing side of things I’m just going to carry on with it and then have more follow-up meetings with the respiratory team.

Read more: Netflix fans convinced actor in 365 Days are having sex for real

“For now, they’ve decided that they’ve done what they can and I’m better placed at home now.”

Wishing Martin all the best as he gets better!

BBC One Homes Under the Hammer Martin Roberts