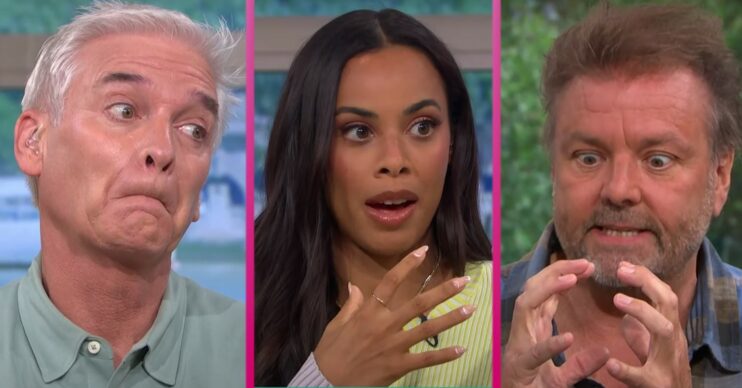 This Morning hosts were utterly aghast going by their expressions

Martin Roberts has stunned This Morning hosts Phillip Schofield and Rochelle Humes with details of his recent health scare.

Homes Under The Hammer presenter Martin was hospitalised in April with chest pains,

The 58-year-old TV host underwent an emergency operation, later claiming he was informed he may have had just hours to live.

Phillip and Rochelle looked horrified earlier today (Wednesday May 11) as Martin explained how medics syringed dark fluid – which he referred to as “black death liquid” – from around his heart.

The presenting pair had already appeared squeamish and concerned early on in the chat as Martin used his hands to illustrate how his condition affected his heart’s ability to function.

But both Phillip and Rochelle looked absolutely rattled as Martin went on to note how he was awake as medics operated on him.

Indeed, Phillip raised his chin higher and higher in the air as if recoiling from Martin’s words, while Rochelle also looked staggered.

Martin on witnessing his own op

Martin said: “You just put your life in the hands of professionals. I’m laying there in the specialist cardiac drain unit. There’s a special operating theatre and there’s a local anaesthetic.

You just put your life in the hands of professionals.

“I’m watching as they stick a tube into the side of my heart. And then, with a big syringe, he starts pulling this dark red-black liquid, which I call death liquid, out.

Viewers seemed delighted to see Martin appears to be on the mend – although his recovery could take a long while yet.

One person tweeted during the segment: “So glad Martin Roberts is looking well #ThisMorning.”

Someone else added: “It was great to see that @TVMartinRoberts is slowly making a recovery on @thismorning.”

And another echoed that thought, also on Twitter: “Good to see @TVMartinRoberts back on TV, talking about his recent cardiac health scare.

“Bet he feels like the luckiest man in the world. Your health is your wealth! #ThisMorning.”