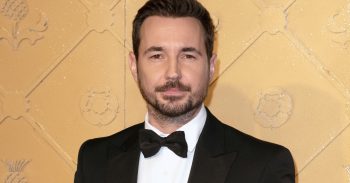 The show will be set in Scotland, which comes as a relief to Martin, who says he has trouble mastering other accents

Martin Compston has signed up to star in a new crime drama.

The Line of Duty actor will be joined by Molly Windsor, Laura Fraser and Jennifer Spence in Traces, Alibi’s first UKTV original series, while Laurie Brett, Vincent Regan, Michael Nardone and John Gordon Sinclair will also have roles in the series.

Read More: Line of Duty fans think Dot Cottan will come back from the dead

Traces is set in Dundee in the Scottish Institute of Forensic Science and Anatomy (SIFA) and follows lab assistant Emma Hedges (Windsor), Prof. Sarah Gordon (Fraser), and Prof. Kathy Torrance (Spence) who join together to attempt to uncover the truth behind an unsolved murder case.

Emma enrols in an MOOC – Massive Open Online Course – to learn the principles of forensic science and quickly realises a fictitious case study has a shocking link to her past, prompting her to start her own investigation.

As she unravels more and more secrets, she struggles to figure out who she can trust but the two professors help her in her attempts to bring down a killer.

Alongside Emma’s main story, other cases and different disciplines of forensic science will also be highlighted.

The thriller is based on an original idea from crime writer Val McDermid and has been written by Scott & Bailey scribe Amelia Bullmore and produced by RED Production Company, the team behind Safe, Happy Valley and Butterfly.

Traces features an all-female production team and will be directed by Rebecca Gatward and Mary Nighy.

The six-part series will air on Alibi later this year.

Martin will no doubt be relieved that the show is set in his native Scotland as he recently admitted he has trouble mastering other accents.

Speaking on BBC Radio Scotland, he said: “I’m not [very good at accents] … but that makes me work my [bleep] off to do them.”

And he always knows when he has “nailed” an accent because he wakes up talking in his well-practised voice, and even sometimes dreams about it.

He added: “I’ve always had a good work ethic. I get so over-prepared so I’ve got no excuses on the day. You know you’ve nailed it when you wake up in the morning and you’re talking to yourself in the accent.

“Your mind just goes to it. You have dreams in it, for sure, because you’re doing it that much.”

Will you be tuning in when the series begins? Leave us a comment on our Facebook page @EntertainmentDailyFix and let us know what you think.