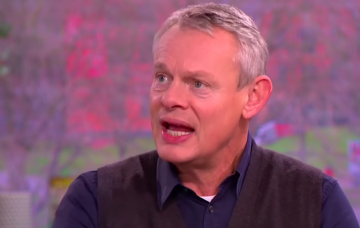 The presenters rushed to apologise for the actor

Ignoring all the rules of morning TV, Martin Clunes surprised viewers on Monday’s This Morning, with a swear-y rant, where he labelled the government a “[bleep] storm.”

But far from being appalled, many fans rushed to agree with the actor, blasting presenter Phil Schofield for apologising.

The star was on the ITV show to talk about his new true-crime drama series Manhunt, which started on Sunday evening.

Martin plays Colin Sutton, the Senior Investigating Officer in the police department hunting down Levi Bellfield, who killed women in the early noughties.

He told Phil, 56, and Holly Willoughby, 37, how the role had “opened his eyes”, adding: “We thought it was a good time maybe to tell that story. I was playing the SIO, so I wanted to see how the rest of the team were towards him – how he was towards him.”

The 57-year-old Doc Martin star added: “We filled our boots and you come away thinking, ‘Thank God we’ve got a police force.’ Which we won’t have if this current [bleep]-storm of a government have their way.”

The hosts rushed to says sorry to viewers for the swearing, with Phil saying: “We apologise for that.”

While many watching at home were shocked by the uncharacteristic outburt, most seemed to agree with the sentiment.

One wrote: “We’ll said Martin Clunes! ‘This [bleep]-storm of a government’. Spot on. #ThisMorning.”

Several more quoted him, with one tweeting: “‘Thank God we have a police force but we won’t if this current [bleep] storm of a government carry on’. The brilliant Martin Clunes on @thismorning. Shame @Schofe had to shut him down. #[bleep]StormOfAGoverment.”

Another commented: “Well done @MartinClunesTV saying it how it is on @thismorning!! @hollywills @Schofe ‘Shower of [bleeps]’ they certainly are!”

A fourth added: “Fantastic response from Martin supporting our police and speaking out against this government STAR award given #MartinClunes.” While one more added simply: “#ThisMorning I love Martin Clunes he’s so good 🙂👏🙌💕.”

The TV veteran also confirmed Doc Martin will be back this year, with filming starting soon on the coast.

He said: “Yeah, we’re off in March back down to Cornwall.”

It’s clear Martin feels passionately about the topic. So we can surely forgive a little bit of potty mouth?

What do you think of Martin’s comments? Leave us a comment on our Facebook page @EntertainmentDailyFix and let us know what you think.