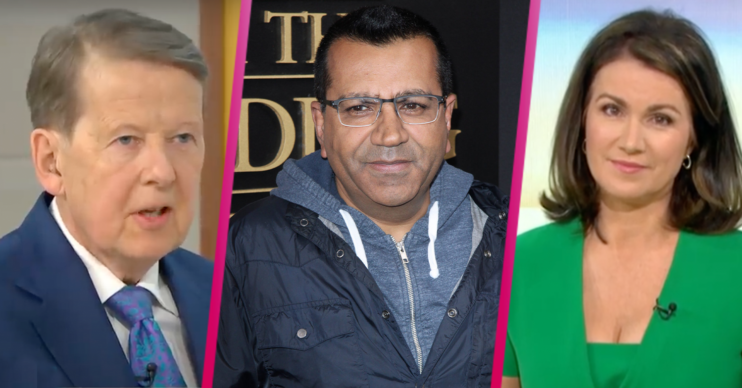 Viewers were divided on the issue

The Martin Bashir interview with Princess Diana was discussed on GMB today (May 24) but viewers accused the show of “jumping on the bandwagon”.

The controversial 58-year-old journalist has been accused of fabricating documents to secure the now infamous Diana interview on Panorama in 1995.

And, on today’s episode of GMB, relatives of two of his alleged prey – George Best and Michael Jackson – levelled new accusations at the journalist.

What did GMB say about the Martin Bashir interview?

They both accused Bashir of using the fact that he had conducted the interview with Princess Diana to secure an audience with their now-deceased relatives.

Alex, 49, claimed Bashir had been “very persistent” and tried to “ply” George with drinks.

Former football star George had battled addiction issues and was seriously ill when Bashir tried to get the interview.

Taj, meanwhile, said Michael “trusted” him and he “let him into his life”. His uncle, he said, “felt safe” with him.

Both were upset at the subsequent documentaries, one of which aired on ITV.

the 'martin bashir bandwagon' will stopping in a town near you!
hop on board#gmb

Eeeeeeeee……let’s all jump on the martin bashir #bandwagon #GMB

After the interviews, viewers took to Twitter to bemoan the fact that the programme had jumped “on the bandwagon”.

One said: “And another one… Alex Best… Jackson cousin… ALL ABOARD THE BANDWAGON #gmb.”

Another wrote: “The ‘Martin bashir bandwagon’ will be stopping in a town near you! Hop on board #gmb.”

Viewers asked what he had done so wrong

It wasn’t just the perceived bandwagon-jumping viewers were unhappy about.

Some actually defended the disgraced journalist.

After hosts Susanna Reid and Bill Turnbull asked Alex what was so wrong about a journalist being “persistent”, some viewers agreed.

“Why are we seeing [an] interview with Alex Best and Michael Jackson family this morning?

“Why did they wait until now to come forward with their concerns? Did they not watch the interview before it was aired on TV?”

Another said: “Sorry Alex… not buying it… you are stretching here. A journalist is normally persistent.

“You participated and got paid… just like you are getting paid today.”

However, some disagreed and accused Susanna and Bill of defending Bashir.

“Looks like Alex Best got done again by Suzanna and Bill who seemed to be justifying sleazy Bashir just because he’s a fellow journalist.